Octopus Book Club: The Will to Change by bell hooks 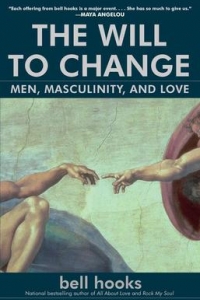 Everyone needs to love and be loved -- even men. But to know love, men must be able to look at the ways that patriarchal culture keeps them from knowing themselves, from being in touch with their feelings, from loving. In The Will to Change, bell hooks gets to the heart of the matter and shows men how to express the emotions that are a fundamental part of who they are -- whatever their age, marital status, ethnicity, or sexual orientation.

With trademark candor and fierce intelligence, hooks addresses the most common concerns of men, such as fear of intimacy and loss of their patriarchal place in society, in new and challenging ways. She believes men can find the way to spiritual unity by getting back in touch with the emotionally open part of themselves -- and lay claim to the rich and rewarding inner lives that have historically been the exclusive province of women. A brave and astonishing work, The Will to Change is designed to help men reclaim the best part of themselves.

Please e-mail events@octopusbooks.ca to RSVP if you wuld like to join us!

Quotes from the book:

"Only a revolution of values in our nation will end male violence, and that revolution will necessarily be based on a love ethic." - p.11

"Performance is different from simply being. In patriarchal culture males are not allowed simply to be who they are and to glory in their unique identity. Their value is always determined by what they do." - p.11

"I often use the phrase "imperialist white-supremacist capitalist patriarchy" to describe the interlocking political systems that are the foundation of our nation's politics." - p.17

"Patriarchy is a political-social system that insists that males are inherently dominating, superior to everything and everyone deemed weak, especially females, and endowed with the right to dominate and rule over the weak and to maintain that dominance through various forms of psychological terrorism and violence." - p. 18

"Despite the contemporary visionary feminist thinking that makes clear that a patriarchal thinker need not be a male, most folks continue to see men as the problem of patriarchy. This is simply not the case. Women can be as wedded to patriarchal thinking and action as men." - p.23

"We need to highlight the role women play in perpetuating and sustaining patriarchal culture so that we will recognize patriarchy as a system women and men support equally, even if men receive more rewards from that system. Dismantling and changing patriarchal culture is work that men and women must do together." - p.24

"Male oppression of women cannot be excused by the recognition that there are ways men are hurt by rigid sexist roles." - p.26

"Often in my lectures when I use the phrase "imperialist white-supremacist capitalist patriarchy" to describe our nation's political system, audiences laugh. No one has every explained why accurately naming this system is funny. The laughter is itself a weapon of patriarchal terrorism. It functions as a disclaimer, discounting the significance of what is being named. It suggests that the words themselves are problematic and not the system they describe. I interpret this laughter as the audience's way of showing discomfort with being asked to ally themselves with an antipatriarchal disobedient critique. This laughter reminds me that if I dare to challenge patriarchy openly, I risk not being taken seriously." - p.29

"Today small boys and young men are daily inundated with a poisonous pedagogy that supports male violence and male domination, that teaches boys that unchecked violence is acceptable, that teaches them to disrespect and hate women." - p. 51

“In the past ten years mass media have produced a number of movies aimed at boys that glorify war (Saving Private Ryan, Independence Day, Men in Black, Blackhawk Down, Pearl Harber, to name a few) that once again make it appear heroic to die alone, away from home, fighting for a cause you may or may not understand. They glorify the patriarchal masculinity that enlightened women and men critique. They serve as propaganda, recruiting the hearts and imaginations of boys. Like gangsta rap, they celebrate male violence on all fronts, including the domination of women.” - p. 71

"... consumer capitalist culture, not feminism, pushed women into the workforce and keeps them there." - p.107

"Most men have clearly been willing to resist patriarchy when it interferes with individual desire, but they have not been willing to embrace feminism as a movement that would challenge, change, and ultimately end patriarchy." - p.108

"Undoubtedly, one of the first revolutionary acts of visionary feminism must be to restore maleness and masculinity as an ethical biological category divorced from the dominator model. This is why the term patriarchal masculinity is so important, for it identifies male difference as being always and only about the superior rights of males to dominate, be their subordinates females or any group deemed weaker, by any means necessary. Rejecting this model for a feminist masculinity means that we must define maleness as a state of being rather than as performance." - p.114

“Our work of love should be to reclaim masculinity and not allow it to be hold hostage to patriarchal domination. There is a creative, life-sustaining, life-enhancing place for the masculine in a nondominator culture.” - p.115

"Patriarchal masculinity teaches men that their selfhood has meaning only in relation to the pursuit of external power; such masculinity is a subtext of the dominator model." - P.116

"As long as men dominate women, we cannot have love between us. That love and domination can coexist is one of the most powerful lies patriarchy tells us all. Most men and women continue to believe it, but in truth, love transforms domination." - p.123