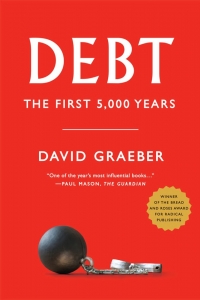 Every economics textbook says the same thing: Money was invented to replace onerous and complicated barter systems—to relieve ancient people from having to haul their goods to market. The problem with this version of history? There’s not a shred of evidence to support it.

Here anthropologist David Graeber presents a stunning reversal of conventional wisdom. He shows that 5,000 years ago, during the beginning of the agrarian empires, humans have used elaborate credit systems. It is in this era, Graeber shows, that we also first encounter a society divided into debtors and creditors.

With the passage of time, however, virtual credit money was replaced by gold and silver coins—and the system as a whole began to decline. Interest rates spiked and the indebted became slaves. And the system perpetuated itself with tremendously violent consequences, with only the rare intervention of kings and churches keeping the system from spiraling out of control. Debt: The First 5,000 Years is a fascinating chronicle of this little known history—as well as how it has defined human history, and what it means for the credit crisis of the present day and the future of our economy.

“An absolutely indispensable—and enormous—treatise on the history of money and its relationship to inequality in society.” —Cory Doctorow, BoingBoing

“Written in a brash, engaging style, the book is also a philosophical inquiry into the nature of debt — where it came from and how it evolved.” —The New York Times Book Review

“One of the year’s most influential books. Graeber situates the emergence of credit within the rise of class society, the destruction of societies based on ‘webs of mutual commitment’ and the constantly implied threat of physical violence that lies behind all social relations based on money.” —Paul Mason, The Guardian

“If you want to get a fresh perspective on the issue, take a look at a fascinating new book called Debt: The First 5,000 Years by David Graeber … not just thought-provoking, but also exceedingly timely.” — Gillian Tett, The Financial Times