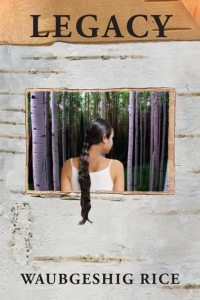 Author Waubgeshig Rice will join us for a discussion!

Please e-mail events@octopusbooks.ca to RSVP (Space is limited, maximum is 12!)

In the winter of 1989, Eva Gibson is a university student living in downtown Toronto. She's homesick and anxious to finish her education and return home to serve her Anishniaabe community. Then tragedy strikes and it beomces the Gibson family's legacy. Back on the rez, Eva's brothers and sister struggle to cope with their losses and redefine 'their legacy'. Some turn to ceremony; some turn to vice. All the while, they contend with a creeping sentiment of revenge.

Legacy deals with violence against a young Indigenous woman and the lingering after-shocks on an Anishnawbe family in Ontario. Its themes of injustice, privilege, and those denied it, reconciliation and revenge, are as timely as today's headlines.

"With Legacy, Waubgeshig Rice places himself squarely at the forefront of the next wave of Native authors. Bold, envisioned storytelling. A hands down pleasure to read." - Richard Wagamese

Listen to Waubgeshig Rice on the Next Chapter with Shelagh Rogers: http://www.cbc.ca/radio/thenextchapter/waubgeshig-rice-diane-schoemperlen-1.3009233.

Waubgeshig Rice is an author and a journalist originally from Wasauksing, Ontario. He developed a strong passion for storytelling as a child while learning about being Anishinaabe. The stories his elders shared and his unique experiences growing up in a First Nation inspired him to write creatively. Some of the stories he wrote as a teenager eventually became Midnight Sweatlodge, his first collection of fiction published by Theytus Books in 2011. His journalism career began when he was a 17-year-old exchange student in northern Germany, writing about being Anishinaabe in a European country for newspapers back in Canada. He graduated from Ryerson University’s journalism program in 2002, and has worked in a variety of media across Canada since. He started working for CBC in Winnipeg in 2006, and has produced television and radio documentaries and features for the public broadcaster, along with reporting on the news. He currently works as a video journalist for CBC News Ottawa.