Octopus Book Club: How Should a Person Be? by Sheila Heti 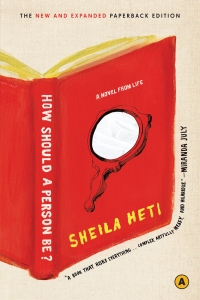 A brilliant portrayal of finding a beautiful life by one of Canada's most exciting literary talents, Sheila Heti

How Should a Person Be? is an unabashedly honest and hilarious tour through the unknowable pieces of one woman’s heart and mind, an irresistible torn-from-life book about friendship, art, sex, and love. Part literary novel, part self-help manual, and part racy confessional, it is a fearless exploration into the way we live now by one of the most highly inventive and thoughtful young writers working today.

Check out its review at http://www.howshouldapersonbe.com/reviews.html.

If you are interested in joining us in this discussion, please e-mail us at events@octopusbooks.ca!

"An unforgettable book: intellectually exacting, unsettling in its fragility, bodily as anything painted by Freud, experimental yet crafted as hell, and yes, very funny." - National Post

"One of the bravest, strangest, most original novels I've read this year." - Boston Globe

Sheila Heti is the author of six books, including How Should a Person Be? which The New York Times Book Review called an "odd, original, and nearly unclassifiable book," and which was named as a best book of the year by The New Yorker, Salon and other places. Most recently, she published the New York Times best seller, Women in Clothes, a collaboration with Heidi Julavits and Leanne Shapton, featuring the voices of 639 women. Her first book was the story collection The Middle Stories (McSweeney's). Next, she published the novel Ticknor (Farrar, Straus & Giroux). With Misha Glouberman, she wrote The Chairs Are Where the People Go (Faber), which The New Yorkerchose as one of its best books of 2011. She also published an illustrated book for children called We Need a Horse featuring art by Clare Rojas.

Sheila Heti was born to a Jewish-Hungarian family in Toronto on December 25, 1976. Her brother, David Heti, is a stand-up comedian. She studied playwriting at the National Theatre School of Canada in Montreal, and Art History and Philosophy at the University of Toronto. She lives in Toronto.