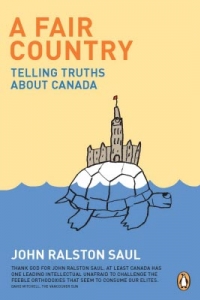 In this startlingly original vision of Canada, thinker John Ralston Saul unveils 3 founding myths. Saul argues that the famous “peace, order, and good government” that supposedly defines Canada is a distortion of the country’s true nature. Every single document before the BNA Act, he points out, used the phrase “peace, welfare, and good government,” demonstrating that the well-being of its citizenry was paramount. He also argues that Canada is a Métis nation, heavily influenced and shaped by aboriginal ideas: egalitarianism, a proper balance between individual and group, and a penchant for negotiation over violence are all aboriginal values that Canada absorbed. Another obstacle to progress, Saul argues, is that Canada has an increasingly ineffective elite, a colonial non-intellectual business elite that doesn’t believe in Canada. It is critical that we recognize these aspects of the country in order to rethink its future.

“John Ralston Saul’s A Fair Country is an intellectually engaging effort to reframe our view of the relationship between aboriginal peoples and Canadians who have arrived (or been born to migrants) over the past four centuries. Saul’s reading of history suggests that a more respectful, even egalitarian relationship existed between aboriginal peoples and European newcomers during the first couple of centuries before the period of de facto cultural genocide from which we are now only haltingly emerging. Being a pollster, I naturally surveyed the opinions of my First Nations, Métis and Inuit colleagues, and found unanimity among them that this book intrigued them, and did not, as I had feared, give unintentional offence with its provocative declaration that “We are a Métis civilization.” Aboriginal peoples are one of Canada’s most rapidly growing demographic groups. Now at 1.2 million, they are close to the numbers estimated to have been here when Jacques Cartier first set foot on this land. An even larger number of us (1.8 million) claim aboriginal ancestry and both these numbers have been growing in recent censuses more rapidly than new births, suggesting that we are in fact witnessing a renaissance of aboriginal identity in this country – an emerging spirit that Saul is sensing. His book’s quickly achieving bestseller status also suggests he is tapping into an inchoate sense among non-aboriginal Canadians that we should be rethinking the stereotypes we learned in the history books of our youth and that are reinforced every few months by the relentless bad-news stories in the media. Maybe – maybe – Saul has begun the dialogue that will create a powerful new national narrative (the Greeks called it mythos) to reframe this relationship from one of ignorance and racism to that of equality and respect.” - Joseph Boyden

“A brilliant and timely argument about Canada’s complex nature and our country’s best future course. What a relief it is to read something so observant about Canada…Our politicians would do well to read this book.” - Globe and Mail

“He suggests a new and believable understanding of how Canada has come to be what it is. A Fair Country has the potential to change the way Canadians see themselves forever. It offers a romantic and heroic vision, and it’s a stirring and unpretentious read.” - Winnipeg Free Press

“Any Canadian reading the book, or learning about its content, will think of Canada differently.” - Toronto Star

“A Fair Country is that rare work of political thought that, by virtue of its daring, is both thrilling and sobering. One reads it with the even rarer sense that it had to be written.” - Montreal Gazette