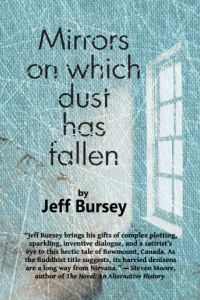 Join Jeff Bursey, Brecken Hancock and Chris Turnbull for a reading of their latest creation Mirrors on which dust has fallen, Broom Broom  and continua!

Set against a backdrop of public scandal and private dilemma, Mirrors on which dust has fallen presents the quotidian concerns of the average and the not-so-average inhabitants of the fictitious Bowmount, the province featured in Bursey’s precursor Verbatim: A Novel. The varied cast of characters examine and defend their spiritual beliefs, from God to evolution; their views on art, as painting battles photography for supremacy; and their sexuality, from confusion to pagan flagrancy. While Verbatim depicts the politics of the elected, Mirrors on which dust has fallen reveals the motives of the electorate, using pitch-perfect dialogue interjected with sly media snippets and elegant, subtle prose, to paint a darkly humorous and deeply telling tale of the late twentieth century in Canada.

“Jeff Bursey brings his gifts of complex plotting, sparkling, inventive dialogue, and a satirist’s eye to this hectic tale of Bowmount, Canada. As the Buddhist title suggests, its harried denizens are a long way from Nirvana.” — Steven Moore, author of The Novel: An Alternative History

Nothing slips by Brecken Hancock's deft ear as she seductively plumbs the depths of the evolution of bathing, doppelgängers, the Kraken, and the minutiae of family with all its tragic misgivings. The poems in Broom Broom pervert the rational, safe parts of the world to extoll and absorb the sweep of human history.

'The eccentric music of Hancock's title points to the witchy magic of the poems within. Here are "snow madonnas maquillaged in ash," a kitchen "achoke with ﬂocks of smoke" and "an unreachable beach crowned / with wigwams of whale ribs" – not to mention a history of the bathtub that will haunt you for life. Students of poetic craft will find much to admire here, from rhymed couplets, sonnets and villanelles to free verse, haikus and lyric prose, but the real gift of this nervy debut is the mythic voice of its speaker – dauntless, erudite and deﬁantly feminist – in the face of trauma and grief: "I douche in tsunami; I'm radiant. It's the end of man and I can do whatever I want." It's thrilling to watch how she does it.' — Suzanne Buffam, author of The Irrationalist

'Brecken Hancock’s Broom Broom is a charged delight for formalists, with her carefully constructed melange of tercets, couplets, haiku, but it’s in her jarring scenery and unsettling pacing that these poems of domesticity and violence come thrillingly to life.' — National Post

Broom Broom is the winner of the 2015 Trillium Book Award for Poetry (English Language) and a National Post Top Book of 2014! More about Broom Broom: http://chbooks.com/catalogue/broom-broom.

Chris Turnbull’s long-awaited debut, the visual and multi-voice continua, displays a remarkable ease across genre and structural boundaries, as well as an ease in which repeated readings both simplify and expand the complexity of a poetic that could only be described as incredibly precise. continua is thick with physical description, scrap and sound, composing pockets of text placed very deliberately against a carved white space.

"You know that language can start to be interesting even before you know where it is coming from. Then when you read Ms. Turnbull you keep saying, oh, what is this, this is going to tell us something. By then it is gone––or you are––after it, as slowly as you can go." - George Bowering

Canadian writer JEFF BURSEY was born in St. John's, Newfoundland and Labrador. He lives in Charlottetown, PEI. His plays have been performed in St. John's and Charlottetown, his short stories have been published in Riptides: New Island Fiction (anthology) and elsewhere, and his literary criticism has appeared in print and online in many venues. In 2010 Enfield & Wizenty brought out his first book, Verbatim: A Novel, considered "a tour de force of verbal dexterity that wields irony so deftly that the book, despite its intimidating scale, both challenges and delights." His latest novel, Mirrors on which dust has fallen, which came out in June 2015 from Verbivoracious Press, has been called by Mark Sampson "an explosively unconventional, deeply disturbing, and relentlessly original work. This is not, in effect, your daddy’s Canadian Literature." To learn more about Jeff's work, visit: www.jeffbursey.com."

BRECKEN HANCOCK's poetry, essays, interviews, and reviews have appeared in Lemon Hound, The Globe & Mail, Hazlitt, Studies in Canadian Literature, and on the site Canadian Women in the Literary Arts. Her first book of poems, Broom Broom (Coach House Books, 2014), was the winner of the 2015 Trillium Book Award for Poetry. It was named by The Globe & Mail's Jared Bland as a debut of the year and by the National Post as a top poetry collection of 2015. She lives in Ottawa.

CHRIS TURNBULL lives near Ottawa. Her short opti/surface work, “[ untitled ],” is one of a trio (with angela rawlings and Heather Hermant) in o w n (Vancouver: Cue Books, 2014). continua is her first full collection of poetry.