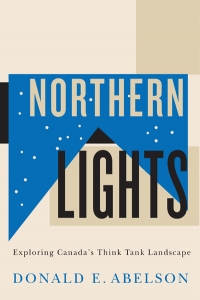 Think tanks are often thought of as a uniquely US phenomenon. Although the largest concentration of think tanks is in the United States, they can be found in virtually every country. Often overlooked, Canada’s think tanks represent a highly diverse and eclectic group of public policy organizations such as the Canadian Centre for Policy Alternatives, the C.D. Howe Institute, the Fraser Institute, and the Mowat Centre among others.

In Northern Lights, Donald Abelson explores the rise of think tanks in Canada and addresses many of the most commonly asked questions about how, and under what circumstances, they are able to affect public opinion and public policy. He identifies the ways in which Canadian think tanks often prioritize political advocacy over policy research, and seeks to explain why these organizations are well-suited and equipped to shape the discourse around key policy issues.

PAY WHAT YOU CAN

“Unique in its rigorous analysis of Canadian think tanks, and its systematic comparison with parallel institutions in the United States, Northern Lights both addresses and elaborates upon Weaver’s typology while presenting original insights on the core features of think tanks and the trend from research to advocacy.” Kent Calder, Johns Hopkins University

“Very little is known about think tanks in Canada, but this volume fills in much of the missing information - who they are, what role they play in the policy process, how they have developed over time. Northern Lights is a substantial addition to the academic literature on politics and policy.” Keith Brownsey, Mount Royal University

Donald Abelson is Professor and Chair, Department of Political Science and Director of the Canada-US Institute at Western where he teaches in the fields of American Politics and US Foreign Policy. He is the author of several books including, Northern Lights: Exploring Canada’s Think Tank Landscape (McGill-Queen’s University Press, 2016); Think Tanks, Foreign Policy and Geo-politics: Pathways to Influence (with Xin Hua and Stephen Brooks, Routledge 2016); Do Think Tanks Matter? Assessing the Impact of Public Policy Institutes, which has been translated into both Arabic (Emirates Centre for Strategic Studies and Research) and Simplified Chinese (Shanghai Academy of Social Sciences), A Capitol Idea: Think Tanks and U.S. Foreign Policy (which is being translated into Simplified Chinese by Nanjing University Press), and American Think Tanks and their Role in US Foreign Policy. His work has also appeared in over four dozen edited collections and academic journals, including: International Affairs, Global Society, Presidential Studies Quarterly, The Canadian Review of American Studies, The Canadian Journal of Political Science and Canadian Public Administration. In addition to his research and teaching interests, he is also a regular commentator on various national and international media outlets where he discusses the think tank phenomenon as well as current developments in American Politics and Canada-US relations.