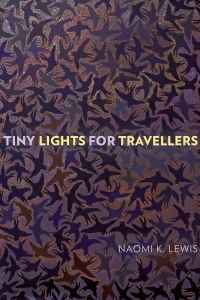 When her marriage suddenly ends, and a diary documenting her beloved Opa’s escape from Nazi-occupied Netherlands in the summer of 1942 is discovered, Naomi Lewis decides to retrace his journey to freedom. Travelling alone from Amsterdam to Lyon, she discovers family secrets and her own narrative as a second-generation Jewish Canadian. With vulnerability, humour, and wisdom, Lewis’s memoir asks tough questions about her identity as a secular Jew, the accuracy of family stories, and the impact of the Holocaust on subsequent generations. Vulnerable and funny, this memoir explores Jewish identity, family, the Holocaust, and belonging. It has been called “an irresistibly wise, poignant, and often funny memoir.” (Lauren B. Davis).

Naomi K. Lewis’s books include the novel Cricket in a Fist, the short story collection I Know Who You Remind Me Of, and the memoir Tiny Lights for Travellers, and she co-edited the anthology Shy with Rona Altrows. Her journalism has been shortlisted for provincial and national magazine awards, and she has served as writer in residence at the University of New Brunswick and the Calgary Public Library. She lives in Calgary and sometimes Kelowna.