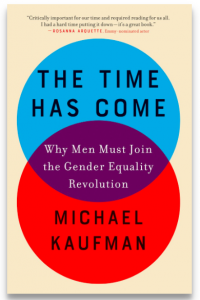 From closing the wage gap, challenging toxic masculinity, ending violence against women, to dismantling the patriarchy itself, the time has come for men to join the fight for gender equality.

Join Michael Kaufman and guests for a discussion that will explore the damaging effects of our patriarchal culture, and how changes in our workplaces, in the ways we raise boys to be men, and in the movement to end men’s violence will bring significant rewards in our community and all around the world.

This event is free of charge at the Octopus Books event space, 251 Bank St. on the 2nd floor. RSVP on Facebook

Michael Kaufman is the cofounder of the White Ribbon Campaign—the largest international network of men working to end violence against women—and for decades has been an advisor on gender equality to the United Nations, governments, NGOs, schools, and workplaces around the world.

Wariri Muhungi is Manager of Global Programs at MATCH International Women's Fund. She has been working globally with girls, women, and LGBTQ-led organizations for 10 years and has led both international and community-based human rights initiatives in Canada, Kenya, Guatemala, Ghana, Australia, South Korea, and Malaysia.

Matt Schaaf has coordinated the Ottawa Coalition to End Violence Against Women's MANifest Change program since 2014. He has spent over two decades involved in community-based violence prevention and education in Ottawa, Winnipeg, Grassy Narrows First Nation, Colombia and Mexico.