Meet and Greet with Warren Kinsella, author of a young adult novel, Recipe for Hate 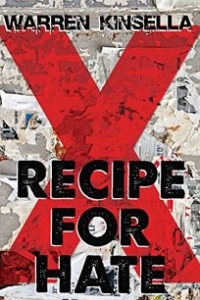 Adult author Kinsella (Fight the Right) sets this riveting murder mystery in Portland, Maine, in the late 1970s. After the gruesome slaying of two of their friends, teenage punk musicians called the X gang are targeted by an unknown enemy and by “anti-punk hysteria” in their community. The group is named after its enigmatic leader, X, best friend to Kurt Lank, who narrates Kinsella’s novel with a hard edge that befits its overall brutality (“For me, punk rock opened up this fucking huge range of creative possibilities—for my art, for my photography, for my music—and it did not give one shit, not one, if I was gay”). Compelled to defend their underground culture and frustrated by the police’s inability to solve the murders, the X gang begins its own investigations, uncovering a neo-Nazi religious movement seeking to destroy punks and other undesirables; simultaneously, Kurt and the others try to discern which adults they can trust. Tension starts high and stays there in this unflinching page-turner, which offers a fascinating glimpse into the early punk scene and a moving testament to the power of friendship.

Based on real events, Warren Kinsella tells the story of the X Gang’s punk lives — the community hall gigs, the antiracism rallies, the fanzines and poetry and art, and what happened after the brutal murders of two of their friends.

Recipe for Hate is suitable for young adults Aged 14 and up.

Recipe for Hate (Dundurn, 2017) is the eighth book from political provocateur Warren Kinsella. After several successful efforts in non-fiction, Recipe for Hate marks Kinsella's debut as a fiction writer. It details the rise of white supremacy and follows a group of teenage punk musicians as they look to investigate and uncover a neo-Nazi movement. Kinsella's other work has covered a range of topics relating to politics, communication, terrorism, hate groups, and of course, his passion for punk rock. With a rise in nationalist movements and hate crimes, his expertise on these all-too-real threats makes Recipe For Hate a compelling and timely tale.

Kinsella's past titles include: