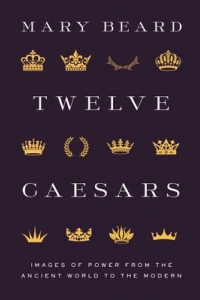 Called the “world’s most famous classicist,” Beard speaks about her latest book, Twelve Caesars, with a fashion icon who “can’t get enough” of ancient history.

What does the face of power look like? Who gets commemorated in art and why? Against a background of today’s sculpture wars, Mary Beard’s latest book tells the story of how for more than two millennia portraits of the rich, powerful, and famous in the western world have been shaped by the image of Roman emperors, especially the so-called Twelve Caesars, from the ruthless Julius Caesar to the fly-torturing Domitian. Twelve Caesars asks why these murderous autocrats have loomed so large in art from antiquity and the Renaissance to today, when hapless leaders are still caricatured as Neros fiddling while Rome burns.

Beard speaks with self-professed book addict Tim Gunn about her story of some of the most challenging and disturbing portraits of power ever created.

"What better escape from the woes of our present day than rolling around in the intrigues of the Roman Empire? Naughty Caesars! Pictures too! Avidly I plunge in!" — Margaret Atwood

MARY BEARD is one of the world’s leading classicists and cultural commentators. A specialist in Roman history and art, she is professor of classics at the University of Cambridge and the author of bestselling and award-winning books, including SPQR: A History of Ancient Rome and Women and Power: A Manifesto. She lives in Cambridge, England.

TIM GUNN is the former co-host of the first 16 seasons of Project Runway, which first aired in 2004. A New York Times bestselling author, his 4th book, The Natty Professor, was released in 2015 and chronicles his 29 years as an educator. Gunn spent 24 of those years as a teacher and administrator at Parsons School of Design, the last seven of which he served as chair of the department of fashion design.