Living on the Land: Indigenous Women’s Understanding of Place with Kahente Horn-Miller and Zoe Todd 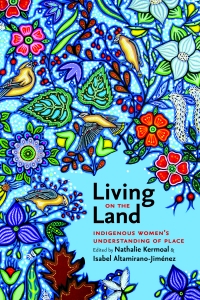 We are thrilled Kahente Horn-Miller and Zoe Todd,  two contributors to Living on the Land: Indigenous Women’s Understanding of Place, will be with us to discuss this book!

Kahente Horn-Miller wrote a chapter on Distortion and Healing: Finding Balance and a “Good Mind” Through the Rearticulation of Sky Woman’s Journey. Zoe Todd's chapter is titled “This Is the Life”: Women’s Role in Food Provisioning in Paulatuuq, Northwest Territories.

An extensive body of literature on Indigenous knowledge and ways of knowing has been written since the 1980s. This research has for the most part been conducted by scholars operating within Western epistemological frameworks that tend not only to deny the subjectivity of knowledge but also to privilege masculine authority. As a result, the information gathered predominantly reflects the types of knowledge traditionally held by men, yielding a perspective that is at once gendered and incomplete. Even those academics, communities, and governments interested in consulting with Indigenous peoples for the purposes of planning, monitoring, and managing land use have largely ignored the knowledge traditionally produced, preserved, and transmitted by Indigenous women. While this omission reflects patriarchal assumptions, it may also be the result of the reductionist tendencies of researchers, who have attempted to organize Indigenous knowledge so as to align it with Western scientific categories, and of policy makers, who have sought to deploy such knowledge in the service of external priorities. Such efforts to apply Indigenous knowledge have had the effect of abstracting this knowledge from place as well as from the world view and community—and by extension the gender—to which it is inextricably connected.

Living on the Land examines how patriarchy, gender, and colonialism have shaped the experiences of Indigenous women as both knowers and producers of knowledge. From a variety of methodological perspectives, contributors to the volume explore the nature and scope of Indigenous women’s knowledge, its rootedness in relationships both human and spiritual, and its inseparability from land and landscape. From the reconstruction of cultural and ecological heritage by Naskapi women in Québec to the medical expertise of Métis women in western Canada to the mapping and securing of land rights in Nicaragua, Living on the Land focuses on the integral role of women as stewards of the land and governors of the community. Together, these contributions point to a distinctive set of challenges and possibilities for Indigenous women and their communities.

Dr. Kahente Horn-Miller (Kahente means “she walks ahead”) (Kanien:keha’ka/Mohawk) is an Assistant Professor in the School of Canadian Studies at Carleton University where she teaches Indigenous Studies. Her performances, governance work and community-based research involve interpreting Haudenosaunee culture and bringing new life to old traditions. It is the fruit of her endeavors as a Mohawk, an educator, and a mother that she brings into her interactions with Onkwehonwe (original peoples) and the academic community. Academics for her is not only about theorizing the issues that Indigenous peoples face as a way to find solutions; it is also about putting these theories in to practice. She does this most specifically through her rematriation work in the retelling of the Sky Woman Narrative, the active work of teaching consensus building and in the classroom. It is also through writing, research, performances and teaching that she challenges others to learn about Indigenous cultures and about themselves as humans, which in the long term fosters relationships between Indigenous and non-native peoples that will go beyond the written word and the classroom and research settings and reconnects us to the realities of reinvigorating Indigenous traditions in the modern world.

Zoe Todd (Métis) is from Amiskwaciwâskahikan (Edmonton) in the Treaty Six Area of Alberta, Canada. She writes about Indigeneity, art, architecture, decolonization and healing in urban contexts. She also studies human-animal relations, colonialism and environmental change in northern Canada.