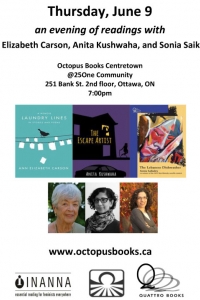 Laundry Lines: A Memoir in Stories and Poems

With grace and courage Ann Elizabeth Carson looks to the past from the perspective of a contemporary feminist. A lively evocation of her aunts and their home in Cheltenham, Ontario reveals the rich and powerful ground for her own emerging sense of herself. As Toronto in the ’30s, ’40s and ’50s comes to life in a rare blend of prose and poetry, Ann Elizabeth is caught unawares as the stories collectively uncover events that shaped her social-political outlook and reveal how our untold stories are inevitably woven into the fabric of our public lives. Laundry Lines: A Memoir in Stories and Poems is about the imperative to tell our stories for our survival, the complex emotional inheritance and painful undertow in families, the slow reconciliation with the blows and beauties meted out by life that comes with age, and the deep sensual salve offered by surrender to nature.

One unique feature of this book is Ann Elizabeth’s exploration of similarities between the unique coded language used by women and the one used by those working on the Underground Railway. The positioning of laundry on a line and particular quilted patterns were used to convey, for instance, whether a man/woman or a travel route was safe. Ann uses her skill as a long-time psychotherapist and writer to elucidate the role of women’s hidden language and how we communicate a rich subterranean world of emotion and knowledge subtly to one another.

More about the book: http://inanna.ca/index.php/catalog/laundry-lines-stories-and-poems/.

The Escape Artist is the story of Nisha, a nine-year-old Indian-Canadian girl whose vivid imagination keeps her entertained in the loneliness she experiences as an only child and one of the few children in her neighbourhood. After her grandmother dies, her aunt Neela comes to live with Nisha and her parents. Neela suffers from severe post-traumatic stress disorder after having witnessed the death of her father when she was a girl. Neela and Nisha bond over their active imaginations, dreaming up adventures together in the room Neela all but refuses to leave – until an unexpected emergency.

More about the book: http://quattrobooks.ca/books/the-escape-artist/.

Amir Radi hates washing dishes. When he left Beirut, with a tightly grasped suitcase, he hadn’t expected he’d end up at a Middle-Eastern restaurant with old cooks and dirty dishes. Amir knows his immigrant dream has somehow drowned in foamy dishwater. But one night, he meets Rami and begins to feel less isolated, more hopeful, and closer to overcoming a tragic time in his childhood, something he had tried to leave in Beirut. Set in Montreal and Lebanon, The Lebanese Dishwasher tells the story of one man’s struggle with his past and self-acceptance while burdened with culture and obligation.

More about the book: http://quattrobooks.ca/books/the-lebanese-dishwasher/.

Writer, sculptor, poet and feminist, Ann Elizabeth Carson is the author of several volumes of poetry and prose, including Shadows Light (2005), My Grandmother’s Hair (2006), and The Risks of Remembrance (2010). Her most recent book, We All Become Stories (2013), explores experiences of memory and aging. Previously, a Toronto psychotherapist in private practice, she worked for many years as a counsellor, as well as a supervisor and instructor at York University. Ann Elizabeth Carson is One of Toronto’s Mille Femmes (2008 Luminato Festival) which paid tribute to women who have made a contribution to the arts. She continues to write, sculpt and read from her work in solo and collaborative events in Toronto and on Manitoulin Island, where she is a long-time summer resident, and to lead workshops on how the arts create a new perspective on the ways in which we see ourselves and our world.

Anita Kushwaha grew up in Aylmer, Quebec, telling stories that got her into trouble with the neighbours from a young age. She has an MA and PhD in Human Geography from Carleton University. She is also a graduate of the Creative Writing Program at The Humber School for Writers.The Escape Artist is her first novella. She lives in Ottawa.

Sonia Saikaley’s first book, The Lebanese Dishwasher, co-won the 2012 Ken Klonsky Novella Contest. Her first collection of poetry, Turkish Delight, Montreal Winter, was published in 2012 and a second collection, A Samurai’s Pink House, will be published in 2017 by Inanna Publications. She is currently working on a novel called Jasmine Season on Hamra Street, which was awarded an Ontario Arts Council grant. A graduate of the Humber School for Writers, she lives in her hometown of Ottawa. In the past, she worked as an English teacher in Japan.