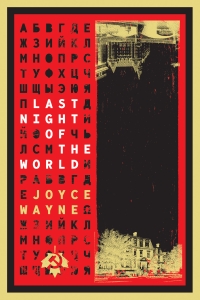 Joyce Wayne is an award-winning literary journalist, a former editor at Quill & Quire and the author of the historical novel The Cook’s Temptation (Mosaic Press, 2013). She was a winner of the Diaspora Dialogues contest for fiction and has been awarded the Fiona Mee Award for literary journalism. She lives in Oakville, Ontario where she teaches writing.

Last Night of the World is a new fiction by Joyce Wayne. It is the first Canadian historical novel whose central figure is a Canadian woman spy.

Last Night of the World weaves a story of impossible choices told by real-life Soviet agent Freda Linton. She and other intriguing characters, whose actions unleashed the Cold War, fight for their survival in the cloak and dagger atmosphere of World War II. Mainly set in Ottawa, a Soviet espionage cell attempts to steal the plans for the atomic bomb from the Americans. The characters are: Igor Gouzenko, the cipher clerk who stole top secret cables from the Soviet Embassy and defected; Fred Rose, the first and only elected member of the Canadian Communist Party to the House of Commons; John Grierson, the founding director of the National Film Board; and the master British double-agent of the Cold War, Kim Philby.

On a hot Ottawa night in August 1945, Soviet agent Freda Linton’s world is about to fall apart. She’s spent the war infiltrating the highest levels of the Canadian government as an undercover operative for the fledging Canadian Communist Party and for Moscow’s military police. As the global conflict nears its conclusion, her Soviet embassy handler and darling of the diplomatic scene Nikolai Zabotin sends her to retrieve atomic secrets from the Chalk River Nuclear Laboratories. When Freda discovers that Soviet cipher clerk Igor Gouzenko plans to turn over top secret files to the RCMP that will expose Freda and the others in her spy ring, she is faced with an impossible decision and must determine who is on her side. Should she risk everything to smuggle out nuclear secrets that will kick off the Cold War? Joyce Wayne’s Last Night of the World brings a high-energy creativeness and emotional tension to a story that is rooted in a generation’s defining incident.

Similar to the desperate lives of the illegals in the television series The Americans, this suspenseful novel is based on the activities of Canadian-based spies, and their handlers, who try to outwit the Canadian government. Like Elizabeth and Philip in The Americans, Wayne’s characters find themselves not only pitted against Western nations, but also against Stalin’s obsession to become a nuclear power.

Hosted by Patricia Smart, author of Writing Herself into Being

Copies of the book will be available for purchase and author signing!

"Joyce Wayne's Last Night of the World does a masterful job of capturing a riveting chapter of Canadian Cold War history and bringing to life one of its most fascinating and enigmatic figures." - Max Wallace, New York Times bestselling author of In the Name of Humanity