Kevin McKay on his new book Radical Transformation: Oligarchy, Collapse, and the Crisis of Civilization 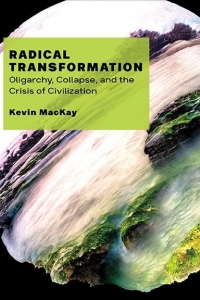 Join author, professor and activist Kevin MacKay for a launch of his new book Radical Transformation:Oligarchy, Collapse, and the Crisis of Civilization! Radical Transformation is a story about industrial civilization’s impending collapse, and about the possibilities of averting this fate. Human communities first emerged as egalitarian, democratic groups that existed in symbiotic relationship with their environments. Increasing complexity led to the emergence of oligarchy, in which societies became captive to the logic of domination, exploitation, and ecological destruction. The challenge facing us today is to build a movement that will radically transform civilization and once more align our evolutionary trajectory in the direction of democracy, equality, and ecological sustainability.

“Kevin MacKay has written a wonderfully lucid yet thoroughly uncompromising account of our world’s crisis. Drawing on a vast knowledge of history, human evolution, philosophy, and modern complexity theory, he tells a story that recognizes the marvels of human civilization while revealing its dark tendency towards oligarchic structures of power and exploitation. He then shows us how we can respond to preserve the best while defeating the worst. Radical Transformation is a tour de force.”– Thomas Homer-Dixon, author of The Upside of Down: Catastrophe, Creativity and the Renewal of Civilization

Kevin MacKay is a social science professor, union activist, and executive director of a sustainable community development cooperative. He lives in Hamilton, Ontario, and when not thinking, reading or writing about social change, can most likely be found in the woods. He combines extensive research into the crisis of civilization with years of experience working in movements that seek to transform society and build a sane and humane future.