Kamal Al-Solaylee In Conversation with CBC's Adrian Harewood on Brown: What Being Brown in the World Today Means (for Everyone) 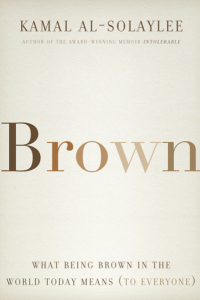 Brown is not white. Brown is not black. Brown is an experience, a state of mind. Historically speaking, issues of race and skin colour have been interpreted along black and white lines, leaving out millions of people whose stories of migration and racial experiences have shaped our modern world. In this new book by Kamal Al-Solaylee¸ whose bestselling Intolerable was a finalist for Canada Reads and for the Hilary Weston Writers’ Trust Nonfiction Prize and won the Toronto Book Award, fills in the narrative gap by taking a global look at the many social, political, economic and personal implications of being a brown-skinned person in the world now. Brown people have emerged as the source of global cheap labour (Hispanics or South Asians) while also coming under scrutiny and suspicion for their culture and faith (Arabs and Muslims). To be brown is to be on the cusp of whiteness and on the edge of blackness.

Brown is packed with storytelling and on-the-street reporting conducted over two years in 10 countries from four continents that reveals a multitude of lives and stories from destinations as far apart as the United Arab Emirates, Philippines, Britain, Trinidad, France, Hong Kong, Sri Lanka, Qatar, the United States, and Canada. It contains striking research about immigration, workers’ lives and conditions, and the pursuit of a lighter shade of brown as a global status symbol. It is also a personal book, as the author studies the significance of brown skin for those whose countries of origin include North Africa and the Middle East, Mexico and Central America, and South and East Asia, he also reflects on his own identity and experiences as a brown-skinned person (in his case from Yemen) who has grown up with images of whiteness as the only indicators of beauty and desire.

“Brown is a work of such intelligence, depth, uniqueness and compassion. . . . A rare accomplishment--a glimpse into another world from within that world. Masterful, original, insightful and ultimately essential reading.” —Deepa Mehta, award-winning director of Water and Midnight's Children

“In this extraordinary book, Kamal Al-Solaylee gives a name, an identity and a story to the disparate billions whose labours, migrations and struggles define our time. A stirring narrative, an empowering manifesto and an unprecedented bid for recognition. This book will change the way you see the world.” —Doug Saunders, The Globe and Mail, and author of Arrival City and The Myth of the Muslim Tide

“Brown is audacious and original, heartfelt and intrepid. By going behind the scaffolding, Kamal Al-Solaylee raises important questions about the hidden foundations of our unfolding century.” —Charles Foran, author of Mordecai: The Life and Times

“Kamal Al-Solaylee perfectly captures the beauty and heartbreak of being brown. This ambitious and powerful book is mandatory reading for anyone who wants to understand the complexities of race relations in our globalized world. You’ll never see a brown person in the same way again.” —Zarqa Nawaz, author ofLaughing All the Way to the Mosque and Creator of Little Mosque on the Prairie

“Brown is a riveting exploration of the ambiguities of race and a window on a multitude of worlds. It’s also thoroughly researched, beautifully argued, and written with grace and clarity.” —Michael Redhill, award-winning author of Martin Sloan and Consolation

KAMAL AL-SOLAYLEE, an assistant professor and undergraduate program director at the School of Journalism at Ryerson University, was previously a distinguished writer at Canada’s national newspaper The Globe and Mail. Al-Solaylee also worked at Report on Business magazine and has written features and reviews for theToronto Star, National Post, The Walrus, Toronto Life, Chatelaine, EYE WEEKLY,Literary Review of Canada and ELLE Canada. Al-Solaylee holds a PhD from the University of Nottingham and has taught at the University of Waterloo and York University. Al-Solaylee lives in Toronto.