Journeys of Survival, Resilience and Belonging 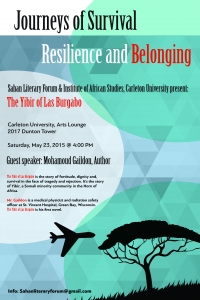 The Yibir of Las Burgabo is the story of a Yibir family in Somalia. (Yibirs are the most ostracized and despised group in Somalia.) In this novel, after an out-of-town trip on foot, Geeddi never returns home. Instead, his two children, Amina and Ali are greeted with news of his death one day. His teenager daughter, Amina, assumes the role of parent for her nine-year-old brother. She knows her family's past which she keeps secret from her brother out of respect for her late father's wishes. As Ali grows up, he becomes an excellent student and a wonderful soccer player. His private thoughts, however, leave him frustrated and confused. He has no memory of his mother and no knowledge of what has happened to her. He knows Yibirs are shunned and unwanted but doesn't know why. He is unable to accept or forget his father's death. And on top of all this, the brother and sister have to deal with poverty. This novel is a narrative of the conflict between Ali's search for a comfortable social niche and the society determined to keep him out. A tug of war continues throughout most of the book until critical moments of revelation drive the central point of the book home for the reader. The Yibir of Las Burgabo is a story about fortitude, dignity and, survival in the face of tragedy, rejection and contempt.