Journey of an Unrepentant Socialist with Brewster Kneen and Eric Chaurette 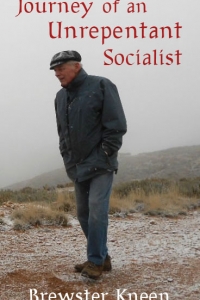 Brewster Kneen is well known as a leading analyst of the industrial food system in Canada and around the world. He is also known for his analysis of corporate capitalism and its strategies of control, including genetic engineering and patenting of seeds and other instruments to privatise resources, appropriate land, and increase corporate profits. He looks at how things are put together – so they can be taken apart.

Brewster describes his book as his “political theological autobiography”, and he can be described not only as an unrepentant socialist but also as an active pacifist, a Christian “outside the walls”, and a genuinely original thinker. The book is a personal life-story with a focus on the 1950s and '60s, coming from someone who was active in the peace and social justice movements in the USA and Canada over the past 5 decades or so. It starts with an inside story of the New Left and the peace and Civil Rights movements in North America, and the Prague-based Christian Peace Conference, and continues with his life as a farmer and writer in Canada. He quotes papers from the young activists of the period (including himself), which sound eerily contemporary.

He credits the virulent anti-Communism emanating from 'America' since the 1950s with the poisoning of our politics and the fragmentation and disintegration of the organized Left in North America from the 1970s up to the present, and concludes that anti-Communism won, preparing the ground for the rise of the radical right that is now so destructive of societies and democracy.

But there is hope: social movements for food sovereignty, social justice, and real democracy are emerging around the globe, along with an increasing realisation that the current capitalist economic system inevitably produces inequity based on its pursuit of short-term gain for the global elites at the expense of the planet.

Come join Brewster Kneen and his family and friends for an evening of celebration for his new book, his journey of an unrepentant socialist.