Jamie Swift on the Vimy Trap 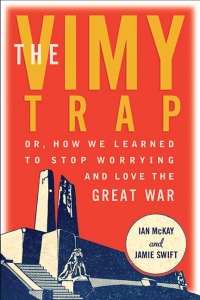 The story of the bloody 1917 Battle of Vimy Ridge is, according to many of today’s tellings, a heroic founding moment for Canada. This noble, birth-of-a-nation narrative is regularly applied to the Great War in general. Yet this mythical tale is rather new. “Vimyism”—today’s official story of glorious, martial patriotism—contrasts sharply with the complex ways in which veterans, artists, clerics, and even politicians who had supported the war interpreted its meaning over the decades.

Was the Great War a futile imperial debacle? A proud, nation-building milestone? Contending Great War memories have helped to shape how later wars were imagined. The Vimy Trap provides a probe of commemoration cultures. This work of public history—combining scholarly insight with sharp-eyed journalism, and based on primary sources and school textbooks, battlefield visits and war art—explains both how and why peace and war remain contested terrain in ever-changing landscapes of Canadian memory.

Kingston writer Jamie Swift is the author of numerous books and lectures at the Smith School of Business at Queen’s University. He is the co-author (with Ian McKay) of Warrior Nation: Rebranding Canada in the Age of Anxiety.