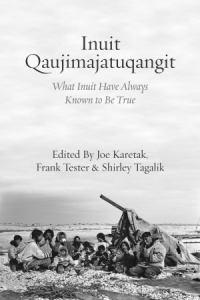 The Inuit have experienced colonization and the resulting disregard for the societal systems, beliefs and support structures foundational to Inuit culture for generations. While much research has articulated the impacts of colonization and recognized that Indigenous cultures and worldviews are central to the well-being of Indigenous peoples and communities, little work has been done to preserve Inuit culture. Unfortunately, most people have a very limited understanding of Inuit culture, and often apply only a few trappings of culture — past practices, artifacts and catchwords —to projects to justify cultural relevance.

Inuit Qaujimajatuqangit — meaning all the extensive knowledge and experience passed from generation to generation — is a collection of contributions by well- known and respected Inuit Elders. The book functions as a way of preserving important knowledge and tradition, contextualizing that knowledge within Canada’s colonial legacy and providing an Inuit perspective on how we relate to each other, to other living beings and the environment.

Frank Tester is a geographer, social worker and Professor Emeritus, University of British Columbia. He is co-author of two books dealing with the social history of Inuit in the eastern Arctic and papers and reports dealing with contemporary social issues affecting Inuit. He has travelled and worked throughout Nunavut Territory and brings to his work a commitment to social justice and human rights. Frank received the Gustavus Myers Award for his research on Inuit rights, history and his contributions to the study and promotion of human rights in North America. He is also a recipient of the 1995 Erminie Wheeler-Voegelin Prize for his co-authored book, Tammarniit (Mistakes): Inuit Relocation in the Eastern Arctic, 1939-62 (1994, UBC Press).

Nellie Taptaqut Kusugak is a retired professional bilingual teacher with an extensive background in traditional and cultural education, teaching English as a second language and working with community Elders. Fluent in Inuktitut and English, Mrs. Kusugak has been a prominent member of the education community since 1986. Nellie has held teaching positions in both the public school system and Nunavut Arctic College, a post secondary institution. In these educational positions, Nellie has taught a range of grade levels and a variety of college courses with a focus in the Nunavut Teachers Education Program, a program in which she herself is a graduate receiving a Bachelors of Education in 1996. Nellie is the daughter of Johnny and Rhoda Karetak and is married to the late Jose Kusugak. Together with her husband, Nellie raised her four children; Aliisa, Pujjuut, Alaana and Special and has seen her family grow to include her thirteen grandchildren and two great-grandchild. Nellie’s passion is preserving and strengthening her Inuit culture, tradition and language and she enjoys both teaching and sharing it with others.

Dr. Margo Greenwood, Academic Leader of the National Collaborating Centre for Aboriginal Health, is an Indigenous scholar of Cree ancestry with years of experience focused on the health and well-being of Indigenous children, families and communities. She is also Vice-President of Aboriginal Health for the Northern Health Authority in British Columbia and Professor in both the First Nations Studies and Education programs at the University of Northern British Columbia. While her academic work crosses disciplines and sectors, she is particularly recognized regionally, provincially, nationally and internationally for her work in early childhood care and education of Indigenous children and for public health.  Margo has served on numerous national and provincial federations, committees and assemblies, and has undertaken work with UNICEF, the United Nations, the Canadian Council on Social Determinants of Health, Public Health Network of Canada, and the Canadian Institute of Health Research, specifically, the Institute for Aboriginal Peoples Health.  Margo received the Queen's Jubilee medal in 2002 in recognition of her tireless work to promote awareness and policy action on the rights and well-being of Aboriginal and non-Aboriginal children, youth and families. In 2010, she was named ‘Academic of the Year’ by the Confederation of University Faculty Associations of British Columbia, and in the following year, she was honoured with the National Aboriginal Achievement Award for Education.

Lisa Wolff is the Director of Policy and Research at UNICEF Canada. Her focus is to promote public policy and practices in Canada that align with the principles and standards of the UN Convention on the Rights of the Child. This includes working to ensure that governance, budget allocation, services and administrative decisions prioritize children and use the Convention’s broad framework to create the best possible conditions to support all children and youth. UNICEF Canada works across issues and sectors, bringing UNICEF’s global research, data and innovation to domestic efforts for children. Lisa is a member of the Board of Directors of PREVNet and of the Canadian Coalition for the Rights of Children. She has a Bachelor of Environmental Studies from University of Waterloo, and a Bachelor of Education and Master of Education from the University of Toronto. Lisa received the Queen Elizabeth II Diamond Jubilee Medal from the Governor-General of Canada in 2012.