In This Together: Fifteen Stories of Truth and Reconciliation Book Launch with Danielle Metcalfe-Chenail and Steven Cooper 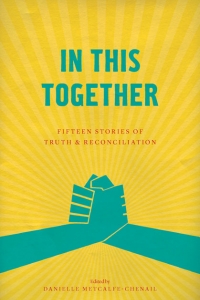 What is real reconciliation? This collection of essays from both Indigenous and non-Indigenous contributors from across Canada welcomes readers into a timely, healing conversation—one we've longed for but, before now, have had a hard time approaching.

These reflective and personal pieces come from journalists, writers, academics, visual artists, filmmakers, city planners, and lawyers, all of whom share their personal light-bulb moments regarding when and how they grappled with the harsh reality of colonization in Canada, and its harmful legacy. Without flinching, they look deeply and honestly at their own experiences and assumptions about race and racial divides in Canada in hopes that the rest of the country will do the same.

Featuring a candid conversation between CBC radio host Shelagh Rogers and Chief Justice Sinclair, this book acts as a call for all Canadians to make reconciliation and decolonization a priority, and reminds us that once we know the history, we all have the responsibility—and ability—to make things better.

“Reconciliation is a thorny, complicated subject that involves asking tough questions and, particularly if you’re not aboriginal yourself, doing a lot more listening than talking . . . In This Together wades enthusiastically into that complexity. And as a result, its fifteen individual voices become much louder than the sum of their parts.” —Edmonton Journal

Danielle Metcalfe-Chenail is Edmonton’s former Historian Laureate, author of Polar Winds and For the Love of Flying, and an occasional columnist for CBC Radio Active.

Steven Cooper is a partner in the Alberta law firm Ahlstrom, Wright, Oliver & Cooper LLP. He was raised in the Northwest Territories and Nunavut where he still spends much of his professional life. His career has focused on working with Indigenous peoples and, in that capacity, he was one of the negotiators of the historic 2005 PanCanadian residential schools settlement and is counsel in the residential school survivors class-action in Newfoundland and Labrador.