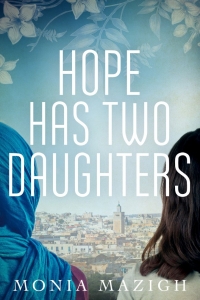 Unwilling to endure a culture of silence and submission, and disowned by her family, Nadia leaves her native Tunisia in 1984 amidst deadly violence, chaos, and rioting brought on by rising food costs, eventually emigrating to Canada to begin her life.

More than twenty-five years later, Nadia’s daughter Lila reluctantly travels to Tunisia to learn about her mother’s birth country. While she’s there, she connects with Nadia’s childhood friends, Neila and Mounir. She uncovers agonizing truths about her mother’s life as a teenager and imagines what it might have been like to grow up in fear of political instability and social unrest. As she is making these discoveries, protests over poor economic conditions and lack of political freedom are increasing, and soon, Lila finds herself in the midst of another revolution — one that will inflame the country and change the Arab world, and her, forever.

Weaving together the voices of two women at two pivotal moments in history, the Tunisian Bread Riots in 1984 and the Jasmine Revolution in 2010, Hope Has Two Daughters is a bracing, vivid story that perfectly captures life inside revolution

"Can literature bear witness? This is the literary quest undertaken by Monia Mazigh in her novel about revolutions and families, about the Bread Riots of Tunisia and the Arab Spring. How do women come of age as dissidents? The difficult secrets shared by mothers and daughters are universal in this thoroughly imagined narrative in which a Canadian story is, necessarily, a story of the world.” —Kim Echlin, author of Under the Visible Life

Monia Mazigh was born and raised in Tunisia and immigrated to Canada in 1991. She was catapulted onto the public stage in 2002 when her husband, Maher Arar, was deported to Syria where he was tortured and held without charge. She campaigned tirelessly for his release. Mazigh holds a Ph.D. in finance from McGill University. She has published a memoir, Hope and Despair, and her novel Mirrors and Mirages was a finalist for the Trillium Book Award in the original French.