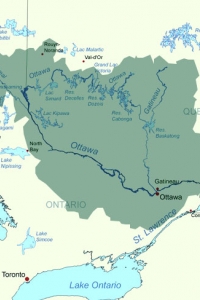 Due to lots of interests in learning about the history of Ottawa River Watershed and positive feedback from our previous session of the same topic, we are hosting this lecture again on December 8! Please see below for details.

Ottawa, the capital city of Canada, is a contested place. It is situated on unceded Algonquin Territory across both sides of Ottawa River Watershed. Currently, it is part of the Federal Comprehensive Land Claim negotiation between Canada, Ontario and the "Algonquins of Ontario" (AOO), which include the Algonquins of Pikwàkanagàn (Golden Lake First Nation) and nine other non-status off-reserve groups.

A Comprehensive Land Claim, also called a modern-day treaty, involves 3 parties: the First Nation(s) whose land is under negotiation, the federal government and the province or territory. In all cases, when a Comprehensive Land Claim negotiation is concluded, the First Nation extinguishes their Aboriginal Rights and Title of their inherent territory, converts to a municipality and receives a one-time monetary compensation, majority of which would be used to pay for the negotiation itself. As of this year, there are about 100 comprehensive land claim and self-government negotiation tables across the country. Not only the Comprehensive Land Claim negotiation process is time consuming and costly, but most importantly, it is a continual colonial policy designed to assimilate and exterminate Indigenous peoples in Canada. It is designed without First Nations’ meaningful participation and without meeting the minimum standard set out in the UN Declaration on the Rights of Indigenous Peoples.

Many First Nations reject this comprehensive land claim policy to address their land and jurisdictional disputes with Canada and the Province. They prefer an alternative process that first and foremost recognizes and affirms their inherent Aboriginal Rights and Title (i.e. Section 35 of the Canadian Constitution, 1982). These First Nations include 4 Algonquin Nations: Barriere Lake, Timiskaming, Wolf Lake and Eagle Village. As you might suspect, these 4 Algonquin Nations also reject the current land claim negotiation that the "Algonquins of Ontario" is undertaking.

Adding to the complexity of Ontario Algonquin land claim process is the proposed development on both the Chaudière and Albert Islands on the western edge of downtown Ottawa. The development ironically called “Zibi”, also a controversy, has received a green light from the city of Ottawa and NCC to build condominiums and commercial establishments before consulting and accommodating all the Algonquin nations who have Aboriginal rights and a say on the uses of these 2 islands. After all, the Chaudière and Albert Islands are still on unceded Algonquin territory.

So, What do these two present-day land disputes mean to Canadian citizens living in Ottawa?

To attempt to answer this question, we propose to begin by learning about the Ottawa River watershed, known in Algonquin as Kitchissippi - Great River, significant to the Algonquin way of life.

If you are interested in attending this lecture, we kindly ask you must register with us and complete the payment BEFORE Monday, December 7. The minimum number of attendees required is 15 in order for us to cover our costs of preparing and delivering this lecture. Your payment of $10 reserves a spot for you and is non refundable. We appreciate your cooperation!

** Online registration is closed at this time.

Peter Di Gangi graduated from Trent University in 1980 with Honours BA in Native Studies/Anthropology. He began working on land claims research in 1980 for the Union of Ontario Indians. Since then, he has continued to work in the research field – land rights and policy. This included 5 years at the Assembly of First Nations as Director of the Centre for Treaty Advocacy and extensive work for the Royal Commission on Aboriginal Peoples in the area of Treaties and Lands. He has also worked for the Union of Nova Scotia Indians, the Union of BC Indian Chiefs, the Native Womens Association of Canada, and a variety of individual First nations and Tribal Councils. He is currently Director of policy & research for the Algonquin Nation Secretariat.