Heroes in My Head, Author Judy Rebick in Conversation with Monia Mazigh 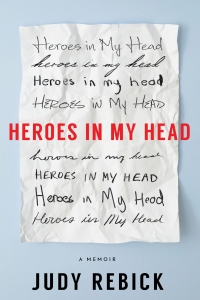 In this riveting memoir, Judy Rebick, one of Canada’s best-known feminists, lays bare the public and private battles that have shaped her life. She documents two major decades in her life: the 1980s, when she became a high-profile spokesperson for the pro-choice movement during the fight to legalize abortion; and the 1990s, when she took on her biggest challenge as a public figure by becoming president of the National Action Committee on the Status of Women.

Here, for the first time, she also reveals the very private battles she waged during these important decades. The result is a fascinating, heartbreaking, but ultimately empowering story.

Hosted by Monia Mazigh, human rights activist and the author of Hope and Despair, Mirror and Mirages and Hope Has Two Daughters.

JUDY REBICK is a well-known social justice and feminist activist, writer, journalist, educator, and speaker. She is the author of Transforming Power: From the Personal to the Political, Occupy This!, Ten Thousand Roses: The Making of a Feminist Revolution, and Imagine Democracy. Founding publisher of rabble.ca, Canada’s popular independent online news and discussion site, Judy continues to blog on rabble.ca. She is the former president of the National Action Committee on the Status of Women, Canada’s largest women’s group, and was the first CAW Gindin Chair in Social Justice and Democracy at Ryerson University. During the 1990s, she was the host of two national TV shows on CBC Newsworld and is a frequent commentator on CBC Radio and Television. In the 1980s, she was a well-known spokesperson for the pro-choice movement during the fight to legalize abortion. She lives in Toronto.