Her Story: Emma Donoghue in conversation with Doireann Ní Ghríofa 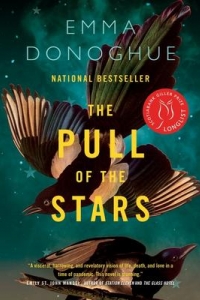 Throughout history, the intricate and intimate details of women’s lives have too often been revealed only through the male gaze, if not altogether erased. Complex lives and experiences have been reduced to a name on a gravestone, a reference in a relative’s letter, or a fleeting mention in a newspaper clipping.

Writers Emma Donoghue and Doireann Ní Ghríofa explore these gaps to find the stories within, re-imagining the lives of women long gone. Join the authors for a conversation about writing, research, unearthing the past, self-discovery, motherhood, art, memory, and the importance of amplifying women’s voices on and off the page.

Register to receive the Zoom invite.

This virtual event is hosted by The Eden Mills Writers’ Festival, July 18th at 2:00pm ET.

In The Pull of the Stars, bestselling author Emma Donoghue once again finds the light in the darkness in this new classic of hope and survival against all odds.

In an Ireland doubly ravaged by war and disease, Nurse Julia Power works at an understaffed hospital in the city centre, where expectant mothers who have come down with the terrible new flu are quarantined together. Into Julia’s regimented world step two outsiders—Doctor Kathleen Lynn, on the run from the police, and a young volunteer helper, Bridie Sweeney.

In the darkness and intensity of this tiny ward, over three days, these women change each other’s lives in unexpected ways. They lose patients to this baffling pandemic, but they also shepherd new life into a fearful world. With tireless tenderness and humanity, caregivers and mothers alike somehow do their impossible work.

The first 10 copies of The Pull of the Stars sold will receive a bookplate signed by the author.

Moving fluidly between past and present, quest and elegy, poetry and those who make it, A Ghost in the Throat by Doireann Ní Ghríofa is a shapeshifting book: a record of literary obsession; a narrative about the erasure of a people, of a language, of women; a meditation on motherhood and on translation; and an unforgettable story about finding your voice by freeing another’s.

On discovering her murdered husband’s body, an eighteenth-century Irish noblewoman drinks handfuls of his blood and composes an extraordinary lament. Eibhlín Dubh Ní Chonaill’s poem travels through the centuries, finding its way to a new mother who has narrowly avoided her own fatal tragedy. When she realizes that the literature dedicated to the poem reduces Eibhlín Dubh’s life to flimsy sketches, she wants more: the details of the poet’s girlhood and old age; her unique rages, joys, sorrows, and desires; the shape of her days and site of her final place of rest. What follows is an adventure in which Doireann Ní Ghríofa sets out to discover Eibhlín Dubh’s erased life—and in doing so, discovers her own.

"A fascinating hybrid work in which the voices of two Irish female poets ring out across centuries. The book merges memoir, history, biography, autofiction, and literary analysis... Lyrical prose passages and moving introspection abound in this unique and beautiful book."—Kirkus (starred review)