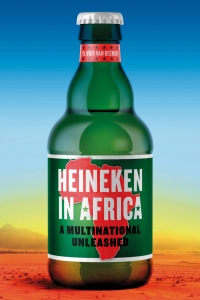 Join us for the Ottawa launch of "Heineken in Africa: A Multinational Unleashed", award-winning Dutch journalist Olivier van Beemen's eye-opening investigation into the beer giant's excesses and tribulations in Africa. Presented by Octopus Books.

For Heineken, ‘rising Africa’ is already a reality: the profits it extracts there are almost 50 per cent above the global average, and beer costs more in some African countries than it does in Europe. Heineken claims its presence boosts economic development on the continent. But is this true?

Investigative journalist Olivier van Beemen has spent years seeking the answer, and his conclusion is damning: Heineken has hardly benefited Africa at all. On the contrary, there are some shocking skeletons in its African closet: tax avoidance, sexual abuse, links to genocide and other human rights violations, high-level corruption, crushing competition from indigenous brewers, and collaboration with dictators and pitiless anti-government rebels.

Heineken in Africa caused a political and media furore on publication in The Netherlands, and was debated in their Parliament. It is an unmissable exposé of the havoc wreaked by a global giant seeking profit in the developing world.

Olivier van Beemen is a Dutch investigative journalist specializing in Africa. For this investigation, he won De Tegel, the most prestigious award in Dutch journalism.

"van Beemen, the author of this well-researched and provocative book, has uncovered an astounding counter-story to the corporate spin . . . an almost perfect case study of what can go wrong when globalisation is unleashed in markets with huge financial potential but without the regulatory frameworks present in more stable parts of the world." — Prospect

"A brilliant and exhaustive investigation into a corporate giant’s claims of its positive actions on that continent." —Counterfire

"A complex tale of a company operating in a country defined by perpetual conflict and warlordism . . . this book it is an important window into how careless corporate behaviour can impede Africa’s development." — African Business