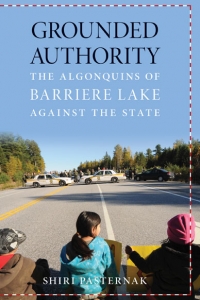 Since Justin Trudeau’s election in 2015, Canada has been hailed internationally as embarking on a truly progressive, post-postcolonial era—including an improved relationship between the state and Indigenous peoples living within its borders. Shiri Pasternak corrects this misconception, showing that colonialism is very much alive in Canada. From the perspective of Indigenous law and jurisdiction, she tells the story of the Algonquins of Barriere Lake, in western Quebec, and their tireless resistance to federal land claims policy.

Grounded Authority chronicles the Barriere Lake Algonquins' ongoing attempts to restore full governance over their lands and natural resources through an agreement signed with settler governments almost three decades ago—an agreement the state refuses to fully implement. Pasternak argues that the state’s aversion to recognizing Algonquin jurisdiction stems from its goal of perfecting its sovereignty by replacing the inherent jurisdiction of Indigenous peoples with its own, delegated authority. From police brutality and fabricated sexual abuse cases to an intervention into and overthrow of a customary government, Pasternak provides a compelling, richly detailed account of rarely documented coercive mechanisms employed to force Indigenous communities into compliance with federal policy.

A rigorous account of the incredible struggle fought by the Algonquins to maintain responsibility over their territory, Grounded Authority provides a powerful alternative model to one nation’s land claims policy and a vital contribution to current debates in the study of colonialism and Indigenous peoples in North America and globally.

Hosted by Hayden King, Pottawatomi and Ojibwe scholar and co-editor of The Winter We Danced: Voices from the Past, the Future and the Idle No More Movement (2015)

Copies of the book will be available for purchase and author signing.

"An impressive and highly original analysis of the overlapping conflict-laden regimes of legal and political authority, Shiri Pasternak's deeply researched study provides an analytically nuanced and engaging account of the ways in which the Algonquins of Barriere Lake confront the jurisdictional claims over their land and lives made by Canada and the province of Quebec. Grounded Authority brilliantly succeeds at intervening at multiple registers." — Alyosha Goldstein, University of New Mexico

Shiri Pasternak is an Assistant Professor at the School for the Study of Canada at Trent University.

She previously held a SSHRC Postdoctoral Fellow at Osgoode Law (2015-2016) and in the Department of Middle Eastern, South Asian and African Studies at Columbia University in New York City (2013-2015). She holds a PhD from the Department of Geography at the University of Toronto, where she wrote a dissertation on the Algonquins of Barriere Lake’s resistance to the federal land claims policy in Canada from the perspective of Indigenous law and jurisdiction. She is a founding member of Barriere Lake Solidarity, a member of the Indigenous Sovereignty and Solidarity Network in Toronto, and an ally in the Defenders of the Land network. Her work has been published in a number of academic journals, including Antipode, Settler Colonial Studies, and the Canadian Journal of Law and Society, and her first book will be published by the University of Minnesota Press in Spring 2017.  It is titled: Grounded Authority: The Algonquins of Barriere Lake Against the State.

Her current research interests involves studying the risk of Indigenous rights in the natural resource extraction economy. She is a Co-Investigator with scholars at York University and Carleton University, as well as community partners Mining Watch and the Indigenous Network in Economies and Trade, in a SSHRC Partnership Development Grant called, “Reconciling Sovereignties: New Techniques for ‘Authorizing’ Extraction on Indigenous Territories.”