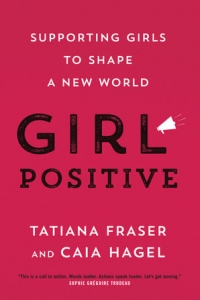 Showcasing diverse voices of girls and young women from North America, Tatiana Fraser and Caia Hagel shift the focus from the media’s sensationalist stories to highlight real-life accounts of how girls are making positive change and shaping a new world.

Girl Positive takes an engaging, cutting-edge view of the cultural, social and political issues facing girls today. Looking closely at topics from social media, sexual violence, hypersexuality and cyberspace identities to girls transforming the world as leaders and agents of change, Girl Positive offers stories of struggle and victory, and brings to light where today’s girls are finding new paths to empowerment. Fraser and Hagel explore these insights and challenges with depth, compassion and a sense of adventure.

The authors travelled from Montreal to Toronto, New Haven, Whitehorse, Los Angeles, Vancouver, San Francisco, Detroit and the Wemindji Cree Nation in northern Quebec, to hang out in coffee shops, dance studios, classrooms, gyms, skate parks, beaches and bedrooms, and talk with school girls, college students and young women in their early careers. Interspersed with their narratives are advice and input from experts in media, health, race and gender politics, sexuality, education and leadership. Each chapter also includes a Survival Kit, which offers tips and discussion questions for girls and the adults in their lives.

Through Fraser and Hagel’s journey readers will learn how to better equip themselves to support girls (and boys)—as parents, friends, educators, mentors and activists. Girl Positive celebrates all girls, illuminates emerging culture and fresh politics, and shows us the future in the making.

General Admission: Pay What You Can

“I was moved to tears first at the possibility of a world where girls can grow up individual, different, free, safe and proud. A world where a female president is not an aberration, a world where little girls can be little girls and dream out loud. A world where girls have a voice and can become women without guilt or fear to shape the lives that become them best. Fraser and Hagel make a strong case for such a world. But Girl Positive is all about the girls, their voices, their particular visions and stories. It’s in their words, all together, in one voice coming in loud and clear. It’s that voice that we can no longer ignore. It’s that voice that will win in the end and when it does, we will all win.” —Agathe Snow, artist and performer

TATIANA FRASER is a writer, speaker and social innovator. She is co-founder and past Executive Director of Girls Action Foundation. Fraser is recognized as a Global Ashoka Fellow and was named one of Canada's Top 100 Powerful Women in 2010 by The Women's Executive Network. Through movement building, education and innovation, Fraser has contributed to advancing the empowerment and leadership of girls and women. She has served on numerous boards and advisory committees including The Carold Institute, Food Secure Canada, Exeko, and Actua among others.

CAIA HAGEL is a writer, creative director and entrepreneur. Her written work on culture and innovation has appeared in many publications from ART PAPERS to Vogue. Hagel is co-founder of GuerillaPop+MediaLab, a boutique media co-op that invented "moral offsetting" to create avant-garde media. She is also co-founder of HungryForFortune, an all-female entrepreneurial collective whose projects pioneer new movements in technology and culture. She has been a speaker on art, design, pop and youth media at several events, including X Contemporary at Art Basel Miami and Forum d'Avignon@Paris, where her presentation on selfies contributed to a new Bill of Digital Human Rights.