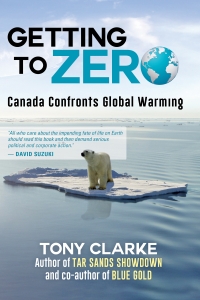 Canadians have been coming to a greater understanding of the threat posed by global warming and the need for urgent action by governments, industry and the public at large. The Trudeau government has, more or less, taken up the cause. Provinces are recognizing the need for action, even as they fight over what that should be. Some multinational corporations are suddenly promoting themselves as environmental stewards. Concerned citizens are looking for ways to effectively reduce their carbon footprint. Yet progress has been slow and limited.

In this book, long-time social and environmental activist Tony Clarke provides the hard-to-find information and analysis about what Canada is and is not doing right now to get to zero. He documents the key initiatives that are moving Canada towards a lower-carbon future. But he also spells out how contradictory government decisions and policies are enabling a business-as-usual approach by the oil and gas industry. In doing so, he examines how the Trudeau government promotes measures to reduce greenhouse gases — but then also promotes pipelines that permit further expansion of Alberta's oil sands and new liquidied natural gas plants with enormous greenhouse gas outputs.

As a participant in events surrounding the 2016 Paris climate summit and as a critic of Alberta's heedless oil sands expansion in his book Tar Sands Showdown, Tony Clarke combines a deep understanding of environmental issues with knowledge of how Canada's economic and political systems operate. He identifies many positive initiatives organized by various civil society groups taking us on the path to zero emissions. For him, effective citizen engagement and action are key to the serious changes needed to get Canada to zero.

Co-Sponsored by the Polaris Institute, the Council of Canadians and the Canadian Centre for Policy Alternatives

"Fossil fuel based economies have created a crisis of planetary warming and ecological change that threatens the future of our own species. It is not our energy demand that is causing the problems but the way we get that energy. Clarke's book is an urgent call for action to avert climate chaos and shows that we can transform energy supply to renewables without the ecological, economic and social chaos that will ensue if we fail to act. All who care about the impending fate of life on Earth should read this book and then demand serious political and corporate action." - David Suzuki

Tony Clarke is the founder and director of the Polaris Institute in Ottawa, an organization dedicated to developing tools and strategies for civic action on major public policy issues, including energy security, water rights, and free trade. He holds a doctorate from the University of Chicago and is the recipient of Sweden's Right Livelihood Award, the "alternative Nobel Prize." Among his most recent books is Blue Gold: The Fight to Stop the Corporate Theft of the World's Water with Maude Barlow. He lives in Ottawa.