Firewater & The Power of Stories: An Evening with Cree Author Harold Johnson 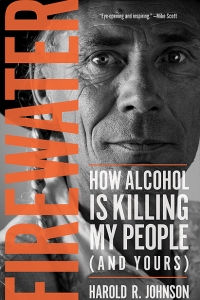 Harold Johnson is the author of Firewater: How Alcohol Is Killing My People (and Yours) short-listed for 2016 Governor General's Literary Award (non-fiction). Harold is also a Crown Prosecutor in La Ronge, Saskatchewan (Treaty 6). He lives with his wife Joan at the northern end of Montreal Lake, where they continue the traditions of trapping and commercial fishing common to Johnson's Cree background. Harold has published five works of fiction. His previous non-fiction work, Two Families: Treaties and Government, examined Canadian constitutionalism from a Cree law perspective.

On February 28 evening, Harold will speak about his book, Firewater: How Alcohol Is Killing My People (and Yours).

A passionate call to action, Firewater examines alcohol—its history, the myths surrounding it, and its devastating impact on Indigenous people.

Drawing on his years of experience as a Crown Prosecutor in Treaty 6 territory, Harold Johnson challenges readers to change the story we tell ourselves about the drink that goes by many names—booze, hooch, spirits, sauce, and the evocative “firewater.” Confronting the harmful stereotype of the “lazy, drunken Indian,” and rejecting medical, social, and psychological explanations of the roots of alcoholism, Johnson cries out for solutions, not diagnoses, and shows how alcoholism continues to kill so many. Provocative, irreverent, and keenly aware of the power of stories, Firewater calls for people to make decisions about their communities and their lives on their own terms.

Powerful testimonials from Richard Van Camp and Tracey Lindberg are included in this book. Written in plain, frank language, Firewater speaks to anyone struggling with addiction.

This event is sponsored by Canadian Union of Public Employees, KAIROS Canada, Centretown United Church and University of Regina Press.

Harold Johnson worked as a miner and logger across northern and western Canada, before quitting the mines to pursue a bachelor's degree in law from the University of Saskatchewan and a Master of Law degree from Harvard University. He now works as a Crown Prosecutor in La Ronge, Saskatchewan. He lives with his wife Joan at the northern end of Montreal Lake, where they continue the traditions of trapping and commercial fishing common to Johnson's Cree background. He is the author of Corvus, a novel.