Farm Labor Struggles in Zimbabwe: The Ground of Politics, author Blair Rutherford in Discussion with Andriata Chironda and Lameck Zingano 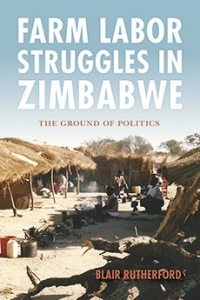 In the early twenty-first century, white-owned farms in Zimbabwe were subject to large-scale occupations by black urban dwellers in an increasingly violent struggle between national electoral politics, land reform, and contestations over democracy. Were the black occupiers being freed from racist bondage as cheap laborers by the state-supported massive land redistribution, or were they victims of state violence who had been denied access to their homes, social services, and jobs? Blair Rutherford examines the unequal social and power relations shaping the lives, livelihoods, and struggles of some of the farm workers during this momentous period in Zimbabwean history. His analysis is anchored in the time he spent on a horticultural farm just east of Harare, the capital of Zimbabwe, that was embroiled in the tumult of political violence associated with jambanja, the democratization movement. Rutherford complicates this analysis by showing that there was far more in play than political oppression by a corrupt and authoritarian regime and a movement to rectify racial and colonial land imbalances, as dominant narratives would have it. Instead, he reveals, farm worker livelihoods, access to land, gendered violence, and conflicting promises of rights and sovereignty played a more important role in the political economy of citizenship and labor than had been imagined.

"Makes a distinctive contribution to an emerging literature on labor in Africa, specificially in relation to farm workers . . . The reader is drawn into both their courageous struggles and their suffering, without the writing ever descending into pathos or melodrama. Blair Rutherford's in-depth knowledge of the wider literature on Zimbabwe further illuminates these events." —Pnina Werbner, author of The Making of an African Working Class

About the Author and Guests

ANDRIATA CHIRONDA is a PhD candidate in History at Carleton University and is also employed as a policy analyst with the federal government department of Immigration, Refugees and Citizenship Canada. Chironda's research focuses on the history of international migration policy and the evolving discursive and material context of refugee protection policy since the end of the Second World War. Chironda holds an M.A. in History, with a specialization in Immigration and Pluralism Studies, from the Munk School of Global Affairs, University of Toronto (2009) and an Honours B.A. in History and Diaspora and Transnational Studies from Trinity College, University of Toronto (2007).

LAMECK ZINGANO is a PhD candidate in Sociology and Anthropology at Carleton University and is currently doing his fieldwork in Toronto. Lameck's research aims to understand how Zimbabweans shape and craft their identity in Canada through social institutions such as the church and a burial society in Toronto. Lameck holds an M.A. in Education from York University 2012; an Honours B.A. in History 2009 and a Bachelor in Education 2010 from York University.