Facing the Anthropocene: Fossil Capitalism and the Crisis of the Earth System, Book Launch with Ian Angus 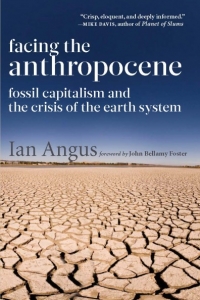 Science tells us that a new and dangerous stage in planetary evolution has begun—the Anthropocene, a time of rising temperatures, extreme weather, rising oceans, and mass species extinctions. Humanity faces not just more pollution or warmer weather, but a crisis of the Earth System. If business as usual continues, this century will be marked by rapid deterioration of our physical, social, and economic environment. Large parts of Earth will become uninhabitable, and civilization itself will be threatened. Facing the Anthropocene shows what has caused this planetary emergency, and what we must do to meet the challenge.

Bridging the gap between Earth System science and ecological Marxism, Ian Angus examines not only the latest scientific findings about the physical causes and consequences of the Anthropocene transition, but also the social and economic trends that underlie the crisis. Cogent and compellingly written, Facing the Anthropocene offers a unique synthesis of natural and social science that illustrates how capitalism’s inexorable drive for growth, powered by the rapid burning of fossil fuels that took millions of years to form, has driven our world to the brink of disaster. Survival in the Anthropocene, Angus argues, requires radical social change, replacing fossil capitalism with a new, ecosocialist civilization.

General Admission: pay what you can

"The best radical book on the state of the planet I have read in the past year…. A superb presentation of climate science and an illuminating discussion of its ‛socio-ecological’ causes and effects. Angus weaves a fascinating, gripping history of ideas into a supremely relevant story for the most existential struggle of our time, the planetary emergency of pending climate catastrophe. Essential reading for ecosocialists, scholars, and activists of every stripe."

Ian Angus is editor of the online ecosocialist journal Climate and Capitalism, and co-author of the Belém Ecosocialist Declaration. His previous books include Too Many People? Population, Immigration, and the Environmental Crisis (with Simon Butler) and The Global Fight for Climate Justice.