Exploring our dark corners: Readings by Felice Picano and Jeffrey Round 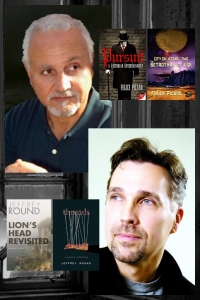 Join Octopus Books in welcoming award-winning authors Felice Picano and Jeffrey Round for readings from their latest books, with host James K. Moran.

Felice Picano’s stories, novellas and novels have been translated into seventeen languages. He has received awards for poetry, drama, short stories, novels and memoirs. His newest titles are the duology Pursuit: A Victorian Entertainment and Pursued: Lillian’s Story. His SF trilogy, City on a Star: Dryland’s End, was republished, followed by a sequel, The Betrothal at Usk, and in late 2022, A Bard on Hercular. Several stories, essays, and reviews appear in new anthologies and magazines. Picano lectures on Vintage Hollywood and screenwriting. felicepicano.net

Jeffrey Round is an award-winning author, filmmaker, and songwriter. His breakout novel, A Cage of Bones, was listed on AfterElton’s 50 Best Gay Books. Lake on the Mountain, first of the acclaimed Dan Sharp mysteries, won a Lambda Award in 2013. His short film, My Heart Belongs to Daddy, won prizes for Best Canadian Director and Best Use of Music. In 2021 he took top juried awards for his music video, Don’t You Think I Know. His latest book is the poetry collection Threads from Beautiful Dreamer Press. jeffreyround.com

ABOUT THEIR RECENT BOOKS

The Betrothal at Usk by Felice Picano

With the end of the Galactic Matriarchy, Vir’ism has risen, centered on Hesperia, The City on a Star. But one leader, Mart Kell, is out of power, while another, the Great Father, Ay’r, is quietly retired. On a small resort planet with a rainbow of rings, Ay’r Eise’nstein-Kell, a 16-year-old boy, air skates across the sands, dreaming of escape to the famed City On a Star.

When the rulers of the galaxy-wide republic and their glamorous entourages arrive on Usk to celebrate a great betrothal, Ay’r finds himself thrust into their midst but even deeper into dynastic schemes and power manipulations he cannot understand. Except, when they are revealed to be perilous to his freedom and to his life. Abused and alone he flees with few resources but knowledge into the unique dangers of The Great Salt Ocean of Usk. There, he will find all the adventure a boy could want. He’ll also discover the plight of the oppressed worker-species, the pamps, who have long awaited their Messiah.

Handsome, intelligent, street-smart, ruthlessly ambitious, and omnisexual, young Addison Grimmins has been hired by the Lord Exchequer of England to be his second to go and do what Lord R. cannot do himself. After a country estate wedding, the Marchioness of R is discovered missing. Is it a kidnapping or … a more sinister plot?

Addison vows to find her and bring her back no matter what it takes. It is the 1880’s and despite having only letters, bribed information, and telegrams as communication, despite having only horse, coach, and trains as transportation, Addison tracks Lady R. across Europe, via the strangest people and places: from Venetian palaces to opium dens. Who and what he discovers about her, and more fatefully about his own life, will lead Addison to the crisis of his life, an extraordinary decision, and a stiletto duel with his most implacable foe.

Threads by Jeffrey Round

“Reminiscent of Cavafy, these are intimate poems of love and death, memory and lost youth. Round writes about it all—the classics, lovers, James Dean, Puerto Vallarta, death and suicide—reminding us that a poem can save you, and often it’s what does.” —Trebor Healey, author of Falling and A Horse Named Sorrow

“These poems . . . weave a remarkable tapestry from the threads of ecstasy and despair, discovery and loss, connection and tragedy. A valuable contribution to both poetry and LGBTQ+ history.” —Anita Dolman, author of Lost Enough

Lion's Head Revisited: A Dan Sharp Mystery by Jeffrey Round

When a four-year-old autistic boy disappears on a camping trip, his mother is reluctant to involve the police. Instead, she calls in private investigator Dan Sharp after a ransom demand arrives. On investigating, Dan learns there are plenty of people who might be responsible for the kidnapping. Among them are an ex-husband who wrongly believed the boy was his son; the boy’s surrogate mother; the boy’s grandmother, who has been denied access to her grandson; and a mysterious woman who unnerves everyone with her unexpected appearances.

A trip to Lion’s Head in the Bruce Peninsula, where the boy disappeared, brings Dan unexpectedly into contact with his own brutal upbringing. But when a suspected kidnapper is found dead, Dan suddenly finds himself chasing the ghosts of the present as well as the past.