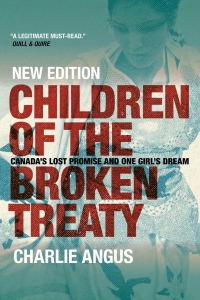 Named "Book of the Year" by the Hill Times, National Post, and Quill & Quire, Children of the Broken Treaty exposes a system of Canadian apartheid that led to the largest youth-driven human rights movement in the country's history. That movement was inspired by Shannen Koostachin, a Cree teenager who died tragically at the age of fifteen. All she wanted was a decent education, and her fight to get it shows the injustices faced by generations of Indigenous children. Shannen found an ally in Charlie Angus, who had no idea how she would change his life and spark others to change the country.

In this new edition of Charlie Angus's award-winning and bestselling book, he brings us up-to-date on the unrelenting epidemic of youth suicides in Indigenous communities, the Thunder Bay inquiry into the shocking deaths of young people there, the powerful impact of the Truth and Reconciliation Commission's final report, and how the Trudeau government's commitment to Indigenous communities continues to be stymied by decades-old policy roadblocks.

Children of the Broken Treaty is the winner of the Ontario History Teacher's Prize, a Foreword Reviews' IndieFAB Award, and two Saskatchewan Book Awards.

Charlie Angus is an elected Member of Parliament for Timmins-James Bay. The author of six books, including Unlikely Radicals, he is also the front man of the band Grievous Angels.