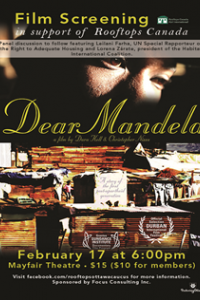 Rooftops Canada invites you to join us February 17th at 6:00 at the Mayfair Theatre for a screening of the documentary "Dear Mandela" with our very special guests Leilani Farha UN Special Rapporteur on the Right to Adequate Housing and Lorena Zárate President of the Habitat International Coalition.

When the South African government promises to ‘eradicate the slums' and begins to evict shack dwellers far outside the city, three friends who live in Durban's vast shantytowns refuse to be moved. Destroyed homes, threats at gunpoint and high-court action, the battle by these three young people to stand up for their rights is a testimony to people power. Dear Mandela follows their journey from their shacks to the highest court in the land as they invoke Nelson Mandela's example and become leaders in a growing social movement. Inspiring, devastating and funny, the film offers a new perspective on the role that young people can play in political change and is a fascinating portrait of South Africa coming of age.

More about the film: http://www.dearmandela.com/