DAVID SUZUKI: Letters to My Grandchildren 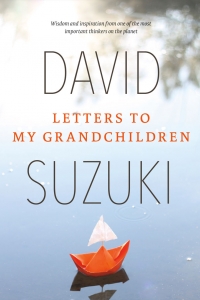 In this inspiring series of letters to his grandchildren, David Suzuki offers grandfatherly advice mixed with stories from his own remarkable life and explores what makes life meaningful. He challenges his grandchildren—and us—to do everything at full tilt. He explains why sports, fishing, feminism, and failure are important; why it is dangerous to deny our biological nature; and why First Nations must lead a revolution.

In his most important book since The Sacred Balance and his most personal ever, revered activist and thinker David Suzuki draws on the experiences and wisdom he has gained over his long life and offers advice, stories, and inspiration to his six grandchildren.

His letters are also chockfull of stories about his own childhood and anecdotes about his children and grandchildren when they were small, providing an intimate look at Suzuki’s life as a father and grandfather. Most of all, as he ponders life’s deepest questions and offers up a lifetime of wisdom, Suzuki inspires us all to live with courage, conviction, and passion.

*** We are no longer selling tickets online.  There are lots of tickets available at either store, or at the door the night of the event!***

**** if you have purchased your tickets online, you can either pick up the tickets at the store at 116 Third Ave. or bring your receipts to the door. We'll have records of your online purchases. (Updated on June 18 at 7PM)

"Finally, each of you might think about your life, what you hope to do with it, what your goals are, or what your vision of the future might be, and then what you might be proudest of when you become an elder like me. I can tell you, you are my legacy, for which I am most proud and happy." - David Suzuki

David Suzuki, Co-Founder of the David Suzuki Foundation, is an award-winning scientist, environmentalist and broadcaster. He is renowned for his radio and television programs that explain the complexities of the natural sciences in a compelling, easily understood way.

In 1974 he developed and hosted the long running popular science program Quirks and Quarks on CBC Radio for four years. He has since presented two influential documentary CBC radio series on the environment, It's a Matter of Survival and From Naked Ape to Superspecies. His national television career began with CBC in 1971 when he wrote and hosted Suzuki on Science. He was host of Science Magazine (1974 – 79) then created and hosted a number of television specials, and in 1979 became the host of the award-winning series, The Nature of Things with David Suzuki. He has won four Gemini Awards as best host of different Canadian television series. His eight part television series, A Planet for the Taking, won an award from the United Nations. His eight part BBC/PBS series, The Secret of Life, was praised internationally, as was his five part series The Brain for the Discovery Channel. On June 10, 2002 he received the John Drainie Award for broadcasting excellence.

Dr. Suzuki is also recognized as a world leader in sustainable ecology. He is the recipient of UNESCO's Kalinga Prize for Science, the United Nations Environment Program Medal, UNEPs Global 500 and in 2009 won the Right Livelihood Award that is considered the Alternative Nobel Prize.

David Suzuki is the author of 17 books all published by Greystone Books Ltd. For a full list of Suzuki's books: http://www.greystonebooks.com/display_author.php?contributor_id=3189.

"The éminence grise of environmentalism continues to rage against the warming of the Earth and the poisoning of our air and water. Recently, Neil Young and Margaret Atwood, among others, joined the tireless David Suzuki on his Blue Dot Tour, a campaign to enshrine the right to a healthy environment within the Canadian Charter of Rights and Freedoms. Upcoming in May: his new book, Letters to My Grandchildren, which shares the wisdom of a lifetime spent ensuring all of our descendants have a future."