David Barsamian: U.S. Politics and the Rise of Trump 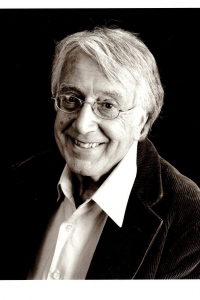 One of America's most tireless and wide-ranging investigative journalists, David Barsamian has altered the independent media landscape, both with his weekly radio show Alternative Radio—now in its 30th year—and his books with Noam Chomsky, Eqbal Ahmad, Howard Zinn, Tariq Ali, Richard Wolff, Arundhati Roy and Edward Said. His latest book of interviews with Noam Chomsky is Power Systems. His best-selling books with Chomsky have been translated into many languages. He lectures on world affairs, imperialism, capitalism, propaganda, the media, the economic crisis and global rebellions.

He is a winner of the Media Education Award, the ACLU's Upton Sinclair Award for independent journalism, and the Cultural Freedom Fellowship from the Lannan Foundation. The Institute for Alternative Journalism named him one of its Top Ten Media Heroes. He is the recipient of the Lifetime Achievement Award from the Rocky Mountain Peace and Justice Center. He has collaborated with the world-renowned Kronos Quartet in events in New York, London, Vienna and elsewhere.

The Boulder Weekly published this feature about him. As Arundhati Roy wrote for The Guardian, Barsamian was deported from India due to his work on Kashmir and other revolts. He is still barred from traveling to "the world's largest democracy."

Near corner of Bank and Somerset Street
Bus routes 1, 2 and 7

This talk is presented by National Union of Public and General Employees (NUPGE) and Octopus Books.

Accessibility: There is an elevator to the second floor but please call 613-688-0752 or email lbush@nupge.ca to make arrangements.