Daughters of the Deer Launch Celebration 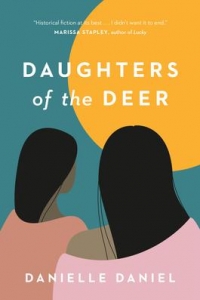 Join Random House Canada and Octopus Books in celebrating the launch of Danielle Daniel's debut adult novel Daughters of the Deer, featuring the author in conversation with writer Kerry Clare.

In this haunting and groundbreaking historical novel, Danielle Daniel imagines the lives of women in the Algonquin territories of the 1600s, a story inspired by her family’s ancestral link to a young girl who was murdered by French settlers.

1657. Marie, a gifted healer of the Deer Clan, does not want to marry the green-eyed soldier from France who has asked for her hand. But her people are threatened by disease and starvation and need help against the Iroquois and their English allies if they are to survive. When her chief begs her to accept the white man’s proposal, she cannot refuse him, and sheds her deerskin tunic for a borrowed blue wedding dress to become Pierre’s bride.

1675. Jeanne, Marie’s oldest child, is seventeen, neither white nor Algonquin, caught between worlds. Caught by her own desires, too. Her heart belongs to a girl named Josephine, but soon her father will have to find her a husband or be forced to pay a hefty fine to the French crown. Among her mother’s people, Jeanne would have been considered blessed, her two-spirited nature a sign of special wisdom. To the settlers of New France, and even to her own father, Jeanne is unnatural, sinful—a woman to be shunned, beaten, and much worse.

With the poignant, unforgettable story of Marie and Jeanne, Danielle Daniel reaches back through the centuries to touch the very origin of the long history of violence against Indigenous women and the deliberate, equally violent disruption of First Nations cultures.

DANIELLE DANIEL is a writer, an award-winning children's book author and an illustrator. Like many Francophones with origins in Quebec, she shares an ancestral link to the people who inspired Daughters of the Deer, a first novel that springs from the story of what happened to the daughter of an Algonquin woman and a soldier/settler from France.  Her picture books include Sometimes I Feel Like a Fox (winner of the Marilyn Baillie Picture Book Award and a Best 100 title at the New York Public Library) and You Hold Me Up, shortlisted for the 2018 Marilyn Baillie Award, among other honours. She holds an MFA in creative writing from the University of British Columbia and lives in the traditional territory of the Atikameksheng Anishnawbek (Sudbury, Ontario).