Curry: Eating, Reading, and Race, a Discussion with the Author Naben Ruthnum 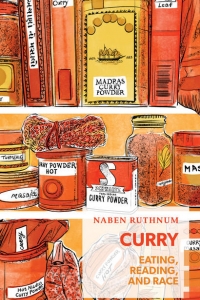 No two curries are the same. This Curry asks why the dish is supposed to represent everything brown people eat, read, and do.

Curry is a dish that doesn't quite exist, but, as this hilarious and sharp essay points out, a dish that doesn't properly exist can have infinite, equally authentic variations. By grappling with novels, recipes, travelogues, pop culture, and his own background, Naben Ruthnum depicts how the distinctive taste of curry has often become maladroit shorthand for brown identity. With the sardonic wit of Gita Mehta's Karma Cola and the refined, obsessive palette of Bill Buford's Heat, Ruthnum sinks his teeth into the story of how the beloved flavour calcified into an aesthetic genre that limits the imaginations of writers, readers, and eaters. Following in the footsteps of Salman Rushdie's Imaginary Homelands, Curry cracks open anew the staid narrative of an authentically Indian diasporic experience.

Naben Ruthnum won the Journey Prize for his short fiction, has been a National Post books columnist, and has written books and cultural criticism for the Globe and Mail, Hazlitt, and the Walrus. His crime fiction has appeared in Ellery Queen's Mystery Magazine and Joyland, and his pseudonym Nathan Ripley's first novel, Find You in the Dark, will appear in 2018. Ruthnum lives in Toronto.