Cuba–U.S. Relations: Obama and Beyond Book Launch with Arnold August 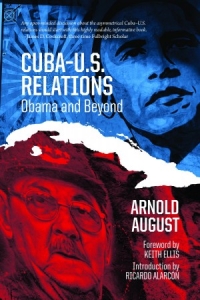 Against the background of the history of Cuba–U.S. interconnectedness and in light of Obama’s ini­tiative and Trump’s election, Arnold August deals with the relationship between the two countries, delving into past and current U.S. aggression against Cuba’s artistic field, ideology and politics. Based on twenty years of fieldwork in and investigation of Cuba, this book provides a unique perspective on the island’s diverse approaches to the cultural war being waged by the U.S. and illustrates the heterogeneous nature of Cuban society.

"This book could not have been more timely. With Fidel Castro’s death focusing outside attention on Cuba’s future and with Trump’s election throwing U.S.–Cuban 'normalization' into question, Arnold August contests the common assumptions and public rhetoric about Cuban politics and about that 'normalization'.” — Antoni Kapcia, University of Nottingham

"To put an end to the deception [about U.S. domestic and foreign policy], rehabilitate the truth and help others understand the issues is a challenge that must be taken up with academic rigour and intellectual integrity, and this book by Arnold August makes a key contribution to the task." - excerpt from the Introduction by Ricardo Alarcón, Deputy and President for the National Assembly of People’s Power, 1993–2013.

** Author's royalties from the book sales at the Ottawa launch will be donated to the Canadian Network On Cuba (CNC)’ s Hurricane Irma Relief & Reconstruction for Cuba Campaign.

"Arnold August brings to the task his finest gift, his superbly developed talent as a journalist, understanding this to mean the habit of assessing different aspects and representations of reality, so that he offers an ultimate fairness to the reasonable and humane reader. August constantly exhibits a related attribute: his remarkable power of analysis. The two together make the experience of reading him an enlightening one." - excerpt from the foreward by Keith Ellis, Professor Emeritus, Department of Spanish and Portuguese, University of Toronto.

Arnold August has an M.A. in political science from McGill University, Montreal, where he resides. His books include Cuba and Its Neighbours: Democracy in Motion (Fernwood Publishing/Zed Books, 2013), Cuba-U.S. Relations: Obama and Beyond (Fernwood, 2017). An accomplished journalist, he contributes articles in English and Spanish to websites in the United States, Canada, Cuba, Latin America and Europe. Since 1997, he has spent extended periods in Cuba pursuing his intensive investigations.