Class Privilege: How Law Shelters Shareholders and Coddles Capitalism, a discussion with the author Harry Glasbeek 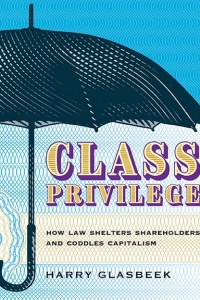 Capitalism’s agenda is the endless pursuit of private accumulation of socially produced wealth. In our system, the corporation—created by law—is meant to hide this agenda, to distract us so that flesh and blood capitalists can do what they like. But when the workings of the corporation are examined, they reveal a betrayal of the very values and norms that, for their legitimacy’s sake, capitalists in our parts of the world purport to share.

Harry Glasbeek highlights one of capitalism’s weak spots–the perverting economic, political, and ethical roles played by the prime instrument of private wealth accumulation: the legal corporation. Once the corporate mask is ripped off, those who hide behind it become visible. Stripped of their protective garb, the capitalist class will be just as naked as the rest of us are when we face their corporations.

"In this profound and fascinating book, Harry Glasbeek rips the legal mask off the ‘corporation.’ In highly readable prose, he shows how the law hides and distorts the true role played by shareholders, shielding them from responsibility as they ruthlessly acquire the riches we all produce. Every progressive should read this book." – Linda McQuaig, author of All You Can Eat: Greed, Lust and the New

Harry Glasbeek, B.A., LL.B. (Hons.) University of Melbourne, JD (Chicago), Professor Emeritus and Senior Scholar, Osgoode Hall Law School, York University, has taught at the universities of Melbourne and Monash in Australia, and the University of Western Ontario in Canada. From 1974 to 1996 he was a Professor at Osgoode Hall Law School. After retirement, until 2013, he spent 6 months of the year as a visitor and Adjunct Professor at Victoria University. He has written books on Australian labour law and Australian evidence law, on Canadian labour law and Canadian evidence law, as well as more than 130 articles on tort law, labour law, Bills of Rights, legal education, corporate law, corporate criminality, corporate social responsibility and occupational health and safety. His last book, the eleventh, is Class Privilege: how law shelters shareholders and coddles capitalism, Toronto: Between the Lines, 2017. His forthcoming book is Capitalism: A Crime Story (2018, Between the Lines).