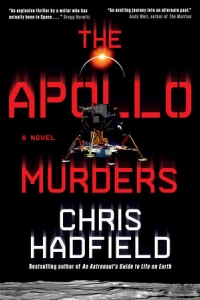 Your purchase of The Apollo Murders gives you exclusive access to this online event with Chris Hadfield, Tuesday October 26th from 8pm to 9pm ET.

As Russian and American crews sprint for a secret bounty hidden away on the lunar surface, old rivalries blossom and the political stakes are stretched to breaking point back on Earth. Houston flight controller Kazimieras "Kaz" Zemeckis must do all he can to keep the NASA crew together, while staying one step ahead of his Soviet rivals. But not everyone on board Apollo 18 is quite who they appear to be.

“An exciting journey to an alternate past” Andy Weir, author of The Martian

“Nail-biting” James Cameron, writer and director of Avatar and Titanic

“Not to be missed” Frederick Forsyth, author of The Day of the Jackal