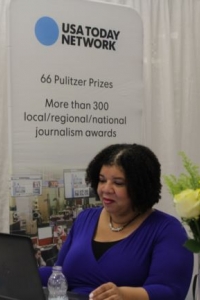 "Alternative facts are not facts. They are falsehoods," - journalist Chuck Todd, “Meet the Press”

What does it mean to be a journalist in a Trump era ?

It’s been a little over two months since his inauguration, but already U.S. President Donald Trump has had a significant effect not just on American political discourse but also on political discourse around the world. The former reality-TV star is a global phenomenon who seems to pervade all aspects of daily life. Trump's impact on journalists and the way they tell stories has been profound. His constant attacks on the credibility of the mainstream media – whom he has dubbed “the enemy of the people” and "fake news" - his penchant for “alternative facts” and early morning tweets have challenged the work of journalists in ways that are unprecedented.

How do journalists do their jobs in an era of unparalleled animosity between them and this Administration? What opportunities does the Trump presidency present for how journalists do their work? What does the Trump presidency mean for racialized and/or marginalized communities and how their stories are told? What stories are being missed while we’re chasing the Donald Trump chaos?

Nichelle Smith is features editor for the USA TODAY Network National News Desk and leader of several award-winning national race and diversity projects for Gannett and USA TODAY. Her ongoing Civil Rights in America website, created in 2010, tells the story of the Civil Rights Movement through the actions of both its leaders and foot soldiers. In 2012, the site was awarded Best Digital Media Online Features Project by the National Association of Black Journalists. The six-part Changing Face of America project, which used a diversity database to tell the story of rapid multicultural and multiracial growth in the United States and its implications, appeared in more than 100 newspapers and broadcast stations nationwide in 2014 and 2015, and won a second-place Philip Meyer Award in 2015 from Investigative Reporters and Editors, Inc. She is also the editor of USA TODAY’s annual Black History Month special edition.

Pay What You Can