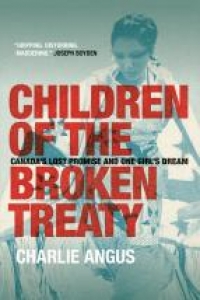 Children of the Broken Treaty exposes a system of apartheid in Canada that led to the largest youth-driven human rights movement in the country’s history. The movement was inspired by Shannen Koostachin, a young Cree woman whom George Stroumboulopoulos named as one of “five teenage girls who kicked ass in history.”

All Shannen wanted was a decent education. She found an ally in Charlie Angus, who had no idea she was going to change his life and inspire others to change the country.

Based on extensive documentation assembled from Freedom of Information requests, Angus establishes a dark, unbroken line that extends from the policies of John A. Macdonald to the government of today. He provides chilling insight into how Canada--through breaches of treaties, broken promises, and callous neglect--deliberately denied First Nations children their basic human rights.

"Shannen did everything in her power to ensure First Nations children would get the proper education they deserve and after reading this book, you will too." - Cindy Blackstock

Janelle Nakogee and Nadine Tookate (two awesome youth leaders from Attawapiskat) will be speaking along with the author at the book launch.

This event is co-sponsored by University of Regina Press and Canadian Union of Public Employees.

Charlie Angus is the Member of Parliament for Timmins-James Bay. The author of six books, including Unlikely Radicals, he is also the front man of the band Grievous Angels.