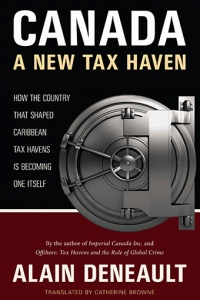 In Canada: A New Tax Haven, Alain Deneault traces Canada’s relationship with Commonwealth Caribbean nations back through the last half of the twentieth century, arguing that the involvement of Canadian financiers in establishing and maintaining Caribbean tax havens has predisposed Canada to become a tax haven itself – a metamorphosis well under way.

Canada was linked to Caribbean nations long before they became tax havens. In the 1950s, an ex-governor of Canada’s central bank attempted to establish a low taxation regime in Jamaica. In the 1960s, the transformation of the Bahamas into a tax haven characterized by impenetrable banking secrecy was shaped by a minister of finance who sat on the Royal Bank of Canada’s board of directors. A Calgary lawyer and former Conservative Party heavyweight drew up the clauses that transformed the Cayman Islands into an opaque offshore jurisdiction. For years, Canadian politicians have debated annexing tax havens such as the Turks and Caicos Islands, making them part of Canadian territory. Canada has signed a free-trade agreement with Panama and is currently seeking a wider agreement with countries in the Caribbean political community. And, notably, Canada currently shares its seat at the World Bank and the International Monetary Fund with a group of Caribbean tax havens.

These exercises in fostering fiscal and banking leniency have predisposed Canada to become one of the most attractive tax havens to foreign interests. Not only does Canada offer one of the lowest corporate tax rates in the world, but a number of loopholes encourage companies to relocate to Canada as if it were Barbados or Bermuda.

Canada: A New Tax Haven is an attempt to analyze the situation and address its implications for Canadians.

Co-Sponsored by Canadians for Tax Fairness.

“Essential reading … Deneault illuminates the blowback effect of Caribbean tax havens becoming, in the hands of big banks and transnational business, a powerful lever for dismantling a century of social progress and democracy itself at home – in this case, in Canada.” – Harold Crooks, director, The Price We Pay

“Deneault shows that the tax-haven problem is not simply a problem of illegal tax evasion or money laundering by the underground economy or criminal gangs but a much larger issue of how the Canadian state has legalized the use of tax havens by large corporations so that they can evade paying their fair share of taxes.” – Dennis Howlett, Canadians for Tax Fairness

Alain Deneault was born in the Outaouais region of Quebec. He completed a research-doctorate at the Centre Marc Bloch in Berlin and the Université de Paris 8, at which he received his PhD in Philosophy under the direction of Jacques Rancière. His interests lie in nineteenth-century German and twentieth-century French philosophy, as well as the work of Georg Simmel. In 1999, as a member of the Cross-Canada Caravan, which included organizations such as the Canadian Union of Postal Workers and the Council of Canadians, Deneault visited many Canadian cities before attending the Millennium Round of the World Trade Organization Conference in Seattle where he spoke at sessions on globalization and the WTO. Deneault’s research and writing practices are diverse and often collaborative, focusing on how international financial and legal agreements increasingly foster the interests of “stateless” transnational corporations over those of nation states and the interests of their human communities.

Selected News about the Author: