Book Signing with Kelly Bronson: The Immaculate Conception of Data 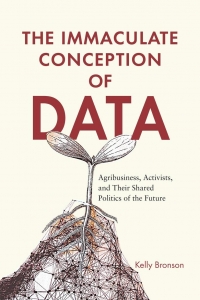 Meet author Kelly Bronson for a book signing in front of our store at 116 Third Ave. on Saturday, October 15 from 1pm-3pm.

The Immaculate Conception of Data peeks behind the secretive legal agreements surrounding agricultural big data to trace how it is used and with what consequences. Agribusinesses are among the oldest oligopoly corporations in the world, and their concentration gives them an advantage over other food system actors. Kelly Bronson explores what happens when big data get caught up in pre-existing arrangements of power. Her richly ethnographic account details the work of corporate scientists, farmers using the data, and activist “hackers” building open-source data platforms. Actors working in private and public contexts have divergent views on whom new technology is for, how it should be developed, and what kinds of agriculture it should support. Surprisingly, despite their differences, these groups share a way of speaking about data and its value for the future. Bronson calls this the immaculate conception of data, arguing that this phenomenon is a dangerous framework for imagining big data and what it might do for society.

Kelly Bronson is a Canada Research Chair in Science and Society at University of Ottawa. She is a social scientist studying and helping to mitigate science-society tensions that erupt around controversial technologies and their governance—from GMOs to big data. Her research aims to bring community values and non-technical knowledge into conversation with technical in the production of evidence-based decision-making.