Book Signing with Jeffery John Eyamie, author of No Escape from Greatness 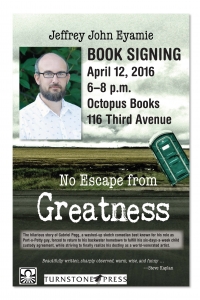 Jeffrey John Eyamie is a Winnipeg screenwriter and novelist who worked in the writers’ room of Less Than Kind (HBO Canada). His comedy pilot Split Level was accepted by the National Screen Institute's Totally Television program. Jeff spent his formative years catching gophers in Virden, Manitoba. Jeffrey's new book No Escape from Greatness is released on March 24 2016! We are lucky that Jeffrey is visiting Ottawa from April 12-14 and are taking the opportunity to have him do a book signing at our store in the Glebe.

Fame can be fickle. Nobody knows that better than overnight sensation Gabriel Pegg . . . you know, Port-o-Potty Guy . . . from Erratic Automatic. Remember him? He went from the penthouse to the outhouse, and now Gabriel is persona non grata in the entertainment biz. Broke, behind on his child support payments, and a wanted man, Gabriel heads to the only place he has left: Greatness, Manitoba, population... I don't know, but there's one traffic light. Returning to sever all family responsibilities so that he can assume his rightful place as a world-venerated artist, he somehow manages to sign himself up for six-days-a-week custody of his 11-year-old daughter. Gabriel realizes there might just be no Escape From Greatness.

Check out the book trailer: https://www.youtube.com/watch?v=9o-zVNIXIgU