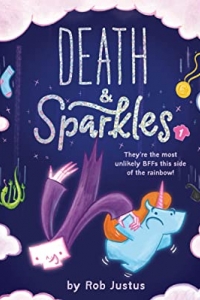 Ottawa-area author/illustrator Rob Justus will be signing copies of his debut graphic novel, Death & Sparkles, out front of Octopus Books at 116 Third Ave on Saturday, October 23 from 12pm.

Being Death is no way to live.

Sure, you're all-powerful, but collecting souls involves a ton of paperwork, and it's impossible to have friends when everything you touch instantly dies.

Being Sparkles the Last Unicorn isn't as fun as you'd imagine, either. Maybe it seems like the whole world wants to be your bestie, but really people just want you to pose with them for selfies, or use you to help them sell stuff.

Everything changes when Death and Sparkles meet and realize they might just be one another's first chance at a real friend. But before they can even enjoy the bromance, the whole world starts freaking out about this unlikely pair. Will fame or BFFdom prevail?