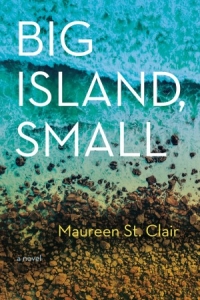 On May 2, please join us to co-launch Maureen St. Clair and Abena Beloved Green's debut novel/poetry book Big Island, Small and The Way We Hold On.

Maureen St. Clair is an artist, peace educator, activist and writer. Born and raised in Canada, with Grenadian citizenship, Maureen has lived in Grenada, West Indies, for twenty-five years with her Grenadian partner Theo and daughter Maya. Maureen is known throughout the Caribbean and internationally for her vibrant, women-positive paintings inspired by her work with women and youth. She is also an associate of Coady International Institute where she facilitates programs in community peace building and global community leadership.

Winner of the 2016 Beacon Award for Social Justice Literature and the 2015 Atlantic Writer’s Competition, Big Island, Small is Maureen's debut novel. It is a story of intimacy and friendship between two Caribbean/Canadian women with similar, yet vastly different, backgrounds who must dismantle their assumptions and biases around race, class, gender and sexuality in order to make amends with violent pasts, release shame, find joy and reconnect with themselves and each other.

the Story of big Island, Small:

Sola is confused the first time she sees Judith, a fair skinned woman with dreadlocks dancing to reggae music. Meeting her gaze, Judith thinks Sola is judging her for appropriating Black culture. A few days later, up against an interlocking fence, Judith kisses Sola. Onlookers hurl stones and racial and gay slurs. Thus begins the complicated friendship between Judith and Sola who live in between the land they were born, the Caribbean, and the land where they presently live, North America.

“Maureen St. Clair is a fearless new kid on the Can-Lit block. Her writing is both lyrical and passionate as she pens this unique story of two young women longing for love, and a sense of belonging in a world riddled with judgements. Her voice is true, her writing lyrical, her story intriguing and unique. If it’s one thing I know, here lies the voice of a powerful writer.”— Donna Morrissey, author of The Fortunate Brother

“What drew me into Maureen St. Clair’s novel: her fiery lyricism and bang-on rhythmic dialogue, a capturing of people and places in deft graceful brushstrokes, and the bravery to delve into the darker aspects of the heart. Big Island, Small is an absorbing work of honesty and originality.” — Dana Mills Author of Someone Somewhere