Book Launch: Welcome to Greater Edendale, Histories of Environment, Health, and Gender in an African City 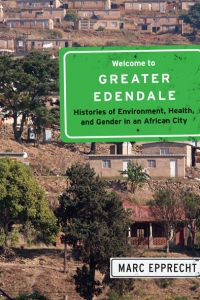 In the coming decades, the bulk of Africa's anticipated urban population growth will take place in smaller cities. Failure to manage environmental and public health problems in one such aspiring city, Edendale, has fostered severe pollution, seemingly intractable poverty, and gender inequalities that directly fuel one of the worst HIV/AIDS pandemics in the world.

A challenging, innovative, and thoughtful examination of the history and politics of South Africa, Welcome to Greater Edendale questions the common assumptions embedded in environmental policy, gender relations, democracy, and the neoliberal model of development in which so many African cities are ensnared.

This event is hosted by the Institute of African Studies at Carleton University.

Marc Epprecht is professor in the Department of Global Development Studies at Queen’s University and author and (co-) editor of 8 books, including Sexuality and Social Justice in Africa (2013, Zed) and Hungochani: The History of a Dissident Sexuality in Southern Africa (2004, McGill-Queen’s). He will be talking about his new book with McGill-Queen’s University Press, Welcome to Greater Edendale. Copies of the book (courtesy of Octopus Books) can be purchased after his talk.